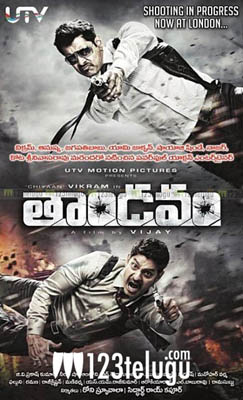 National Award Winner Chiyaan Vikram who captivated the audiences with his unforgettable performances in various movies teams up with Anushka, Amy Jackson, Jagapathi Babu,Nasser, Lakshmi Rai, in the direction of A.L Vijay, to offer this slick action thriller. Extensively shot in London, the film is designed as An Unusual Revenge Story.

Vikram plays a dual – dimensional role, as a RAW agent who turns a Visually Challenged Person, navigating his surroundings only through sound, a technique called as ECHOLOCATION and yet performing breathtaking action sequences. Incidentally, the character of the visually challenged person in high risk situations is inspired by the real life of Daniel Kish from United States.

G.V Prakash is Composing the music after the blockbuster musical success of Mayakkam Enna And Aadukalam. The music has received great reviews and has been topping on all the FM charts and Radio Stations. Cinematography by Nirav Shah is breath-taking and one of his finest work in Tamil Cinema.

PRIME Media, the pioneer event management and entertainment company is proud and delighted to announce the release of this highly anticipated movie ‘Thandavam’ in USA

We thank the UTV team for giving us this opportunity to distribute THANDAVAM in USA, releasing in the theaters on September 28th 2012 and will be having subtitles in ENGLISH.

All interested in screening this movie in your respective areas and locations please contact PRIME Media at 408-905-6244, primetechsj@gmail.com