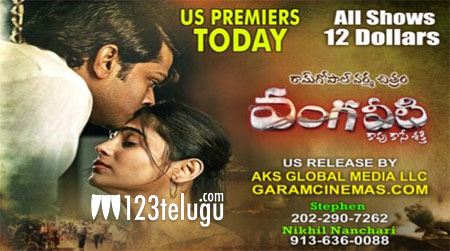 Vangaveeti USA Premiers are confirmed for today Dec 22nd. Releasing in about 30 locations and all locations have premiere shows around 8 pm local time zones.

We sincerely apologize for not able to release the film in more locations as all most theaters preferred Hollywood films this holiday season giving no room for our film.

For locations not listed, if you are interested in putting the shows, please contact your local theaters and request them to put some shows any time during the holiday season. We will take care of drive for that theater and put the show. We already tried Carmike, AMC and Regal theaters very hard and could not get shows from them. So, contact some local theaters and see if they would like to put our film.

Online ticketing is already opened in most of the locations and remaining will be opening soon.

Vangaveeti is a Telugu period drama, biographical crime film written and directed by Ram Gopal Varma.The film is based on the lives of politician Vangaveeti Mohana Ranga, and his brother Vangaveeti Radha Krishna Rao Sr., and their altercation with communist dominated Vijayawada of the 1980’s Andhra Pradesh.

Enjoy this RGV’s most awaited film on Big Screens and stay away from piracy.