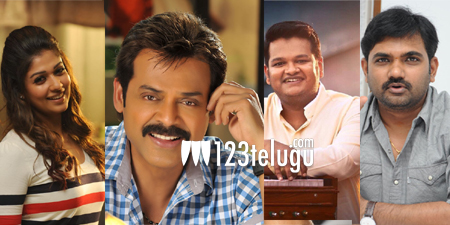 After grand success of Drushyam and Gopala Gopala, Victory Venkatesh is back again with the latest sensation Maruthi for his next outing. Venkatesh is teaming up with Nayanthara for the third time to relive the magic. Surydevara Naga Vamsi will be producing this family entertainer under Sithara entertainments banner and senior producer S.Radhakrishna (Chinababu) will be presenting this venture.

Movie is gonna be officially launched on the 16 December with a formal pooja and will start rolling on the same day. Music director Ghibran who has composed beautiful tunes for ‘Run Raja Run’, ‘Jil’ and recent release ‘Cheekati Rajyam’ will be doing music for this untitled film.

S. Vivek Anand will handling the camera and Uddav is roped in for editing. Producer Surya Devara Nagavamsi is aiming to release the film for 2016 summer.