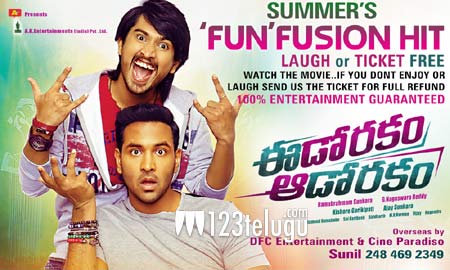 Eedo Rakam Aado Rakam struck the right chord at the box office. Audiences loved the comic timing of the star cast led by Vishnu Manchu and Raj Tharun. The film eagerly awaited by fans and the trade certainly lived up to their expectations.

This new film is on its way to become the most watched movie of the season and to reap box office sales profits, as fans of Telugu Cinema continue to pack theaters in Karnataka, AP and Telangana in Single and Multiplex screens around the globe.

The highly anticipated Vishnu Manchu film comic saga has received glowing reviews as it opened in screens last Thursday, and is being credited with breathing fresh life into confusing (Comedy) genre that audiences loved to the core.

The rollicking success of Eedo Rakam Aado Rakam has stoked Telugu film industry 2016 and, in turn put smiles back on the face of fans, movie goers, producers, distributors and theater owners.