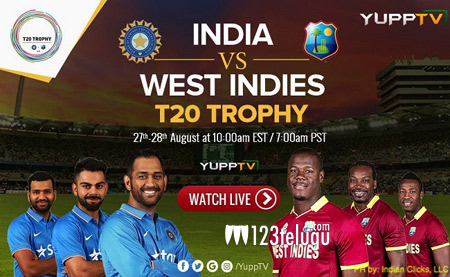 Atlanta, August 25, 2016: Wait is on to see if Indian players will take their revenge on West Indies after T20 WC semifinal loss. Gear up to watch live & exclusive streaming in the USA, Canada & Caribbean Islands only on YuppTV.

American soil will witness the clash of two of the powerhouses of T20 cricket, India and West Indies. Yes, T20’s two-match series which is scheduled on 27th & 28th Aug in Florida is all over the web now. In the last six years, West Indies have won two World T20 titles. Cricket enthusiasts are feeling a sense of tension in the air as to who will raise to glory with this series of matches.

The return of Chris Gayle and Sunil Narine will surely bolster the team’s chances in the forthcoming matches. India, on the other hand, will be traveling with the more or less same team that competed in the Test series.

It would be interesting to watch the opening pair of RCB – IPL team (Kohli & Galye) playing against each other.

Fans from all over the country are expected to descend on Florida. “Having the games in the US,” said Aaron (Executive secretary, American Cricket Federation), “does essentially two things, 1) It opens up a relatively untapped market for the sport, and, 2) It helps grow the fan base and support of cricket in the country.”