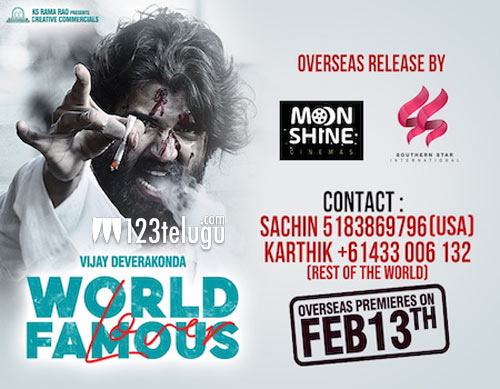 Moonshine Cinemas, an Overseas distribution company who distributed Blockbuster “Majili” this year, is excited to announce their next project of Vijaya Devarakonda’s “World Famous Lover” which is slated to release on February 14th as Valentine’s Day special & Overseas Premieres on February 13th.

Vijay Devarakonda is pairing with 4 heroines in this movie. Raashi Khanna, Aishwarya Rajesh, Catherine Teresa and Izabella Leite are playing the female leads of this movie.

Overseas Audience are eagerly waiting to see our Rowdy Boy in the direction of Kranthi Madhav who directed a heartwarming film like Malli Malli Idhi Rani Roju previously.

After Geetha Govindam, Gopi Sundar who is known for scoring soothing music is composing tunes for Vijay Devarakonda while Jaya Krishna Gummadi cranked the camera.

The prestigious banner Creative Commercials is Bankrolling this Project. The Promotional Material of the film released by the makers so far is very exciting.

‘World Famous Lover’ Posters that released few days back offers Vijay Devarakonda and all the female leads characters in the movie and promises a romantic entertainer with loads of emotions.

Moonshine Cinemas in association with Southern Star International is releasing the movie in the entire Overseas.

USA Premieres are planned in record number of Theaters in Vijay Devarakonda career. Theater list will be announced very soon.

Moonshine Cinemas would like to thank Producers K.S.Rama Rao Garu and K. Vallabha Garu and Hero Vijay Devarakonda Garu for giving us this Opportunity.