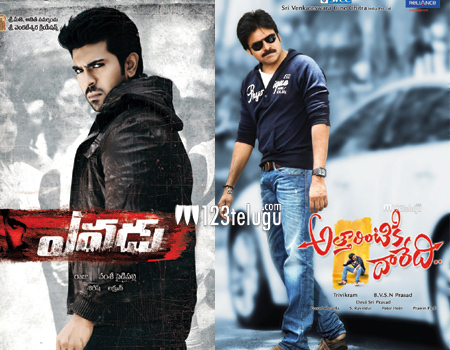 ‘Attarintiki Daredi’ is touted to be the one of the most anticipated movie of 2013 in the direction of Trivikram Srinivas, who is known to provide fun filled with high energetic and unique dialogues in association with the most talented Music Director Devi Sri Prasad. Power star Pawan’s characterization, Trivikram’s comedy timing and trademark, beauty Samantha’s Power Performance and Bhogavalli Prasad’s high Production values are said to be the major highlights of the movie.

‘Yevadu’ another most anticipated movie of 2013 in the direction of Vamsi Paidipally, who is sensible director for family entertaining movies, is associated with the talented Music Director Devi Sri Prasad. Mega Power Star Ram Charan’s looks along with Stylish Star Allu Arjun’s dances with the talented Shruthi Hassan, Amy Jackson and Heartthrob Kajal Agarwal’s performances and Dil Raju’s uncompromising production nature are some of the highlights of the movie.