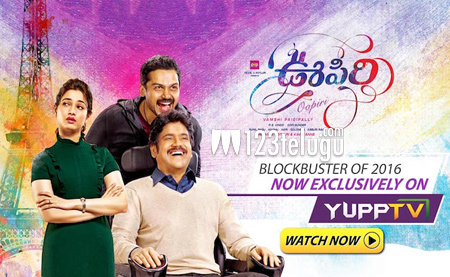 New Delhi, April 29th, 2016: In a move to delight the Indian expat community, YuppTV, the world’s largest Over-The-Top (OTT) provider for South Asian content, has announced the digital premiere of two super-hit movies, Oopiri and Thozha. The movies, which stars renowned actors such as Nagarjuna Akkineni, Karthi, Tamannah, Prakash Raj and Jayasudha, will be made available for YuppTV users across the world, with the exception of India.

TheIndian Telugu-Tamil comedy-drama film adaptation of the French film TheIntouchables, Oopiri (Telugu) and Thozha (Tamil) are directed by VamsiPaidipally and chart the life of a paraplegic billionaire Vikram Aditya, played by Nagarjuna, and his topsy-turvy relationship with his caretaker Seenu, enacted by Karthi.

The unique concept of the movies and the performances has been appreciated by both critics and the viewers, resulting in their superlative success.

Speaking on the announcement, Uday Reddy, Founder and CEO, YuppTV, said, “We, at YuppTV, have always endeavoured to provide highly curated, relevant and the latest entertainment solutions to our viewers across the globe. Making these movies available through YuppTV’s platform will allow our expat users to see their favourite superstars in action, and underlines our commitment toenable access to the latest super hits off the shelf.”

Prasad V. Potluri, Chairman of the PVP Group, added, “Being the largest OTT enabler for South Asian content in the world, partnering with YuppTV for the digital premiere of our movies will allow us to reach out a massive viewer base.Our Oopiri/Thozha is a movie celebrating life and it showcases the relationship between a physically challenged billionaire and a socially challenged slum dweller. We are confident that the Telugu and Tamil speaking viewers around the globe will enjoy this movie.”

The movies can be accessed through the YuppTV website, www.yupptv.com, or via its app on Smart TVs, Smart blu-ray players, streaming media players, gaming consoles, smartphones and tablets.

About YuppTV
YuppTV is one of the world’s largest internet-based TV and On-demand service provider for South Asian content, offering more than 200+ TV channels, 5000+ Movies and 100+ TV Shows in 12 languages. YuppTV has 25000 hours of entertainment content catalogued in its library, while nearly 2500 hours of new on-demand content is added to the YuppTV platform every day. YuppTV offers Live TV and Catch-Up TV technology. YuppTV has its presence in more than 50 countries.

It has recently launched YuppFlix, a movie on demand streaming service for Expat Market and YuppTV Bazaar an online marketplace for the premium content curator. YuppTV is currently ranked #1 Internet Pay TV platform for Indians living abroad and also the largest Internet TV platform from premium content availability in India. YuppTV is the most downloaded Indian Smart TV app and it also boasts of 8 million mobile downloads with 4.0 user rating.