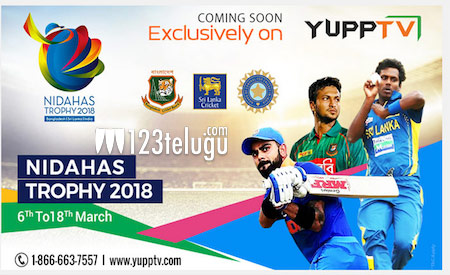 Cricket aficionados can catch the fast-paced action and the nerve-wracking excitement of the upcoming tri-nation series, Hero Nidahas Trophy 2018, between Bangladesh, India and Sri Lanka on YuppTV, the world’s leading OTT brand for South Asian content.

The T20 matches will be held in Colombo, between March 6th and March 18th. All the matches will be exclusively available on YuppTV in the USA, Canada, Middle East and North Africa, Australia, New Zealand, Malaysia, United Kingdom and Europe.

The tri-series tournament, played in celebration of Sri Lanka’s 70th year of independence, will open with India taking on Sri Lanka in the opening match. The tournament will follow a round robin format, with all three teams playing each other twice, and the top two teams progressing to the final on March 18th.

Mr. Uday Reddy, Founder & CEO, YuppTV, said, “Unlike other games, cricket has exemplary viewership across the globe, and T20 cricket has helped it gain more popularity than ever before. We are pleased to have exclusive rights for broadcasting the Hero Nidahas Trophy 2018 series in various geographies and look forward to offering our viewers the convenience of streaming the action-packed game, without missing a single moment of the same.”

Cricket fans can watch all the action LIVE from R.Premadasa Stadium in Colombo on www.yupptv.com or via the YuppTV app on their smart TVs, smart Blu-ray players, streaming media players, gaming consoles, smartphones, and tablets.

YuppTV is one of the world’s largest internet-based TV and On-demand service provider for South Asian content, offering more than 300+ TV channels, 5000+ Movies and 100+ TV Shows in 14 languages. YuppTV, recently received funding from Emerald Media, a Pan-Asian platform established by leading global investment firm KKR for investing in the media and entertainment sector, wherein Emerald Media acquired a significant minority stake in the company for US$50mn.

Emerald Media is led by industry veterans Rajesh Kamat and Paul Aiello, supported by an experienced team of investment and operating executives. The platform primarily focuses on providing growth capital to media, entertainment and digital media companies. YuppTV had earlier raised its Series A round of funding from Poarch Creek Indian Tribe of Alabama.

It also offers YuppFlix, a movie on demand streaming service for Expat Market and recently launched YuppTV Originals to bring forth unconventional story telling in collaboration with the top talent from the movie industry. Originals will be available in episodic format for the digital audience, exclusively on YuppTV’s platform.

YuppTV is currently ranked #1 Internet Pay TV platform for Indians living abroad and the largest Internet TV platform from premium content availability in India. YuppTV is the most downloaded Indian SmartTV app and it also boasts of 14.5 million mobile downloads with 4.0 user rating.