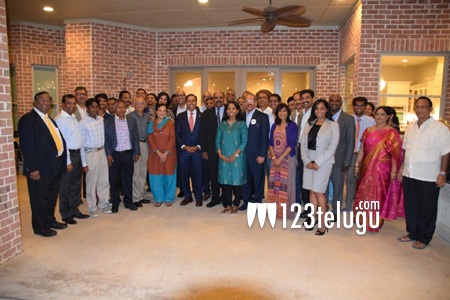 Dallas, TX: Several leaders of the Dallas Indian American communitygave a rousing welcome to Raja Krishnamoorthi, who is running for US Congress as a Democratic Party candidate from the 8th Congressional District of Illinois.
The fundraising banquet that was hosted on August 3rd atone of the prominent Indian American community leaders, Dr. Prasad Thotakura’s residence in Colleyville, TX was very successful.

In his welcoming remarks, Dr. PrasadThotakura said “that the stage is set for Raja Krishnamoorthi, 42 to become the next US Congressmember in November 8th general elections. I’m sure Raja will be one of the best US Congressmembers in the history because he knows the pain and suffering of the common people. As a matter of fact, Raja has spent most of his child hood living on public assistance and on food stamps. Now, it is very heartening to note that Raja has the distinction of being endorsed by US President Barak Obamabesides more than 100leading Democratic leaders. Raja was introduced as one of the emerging Democratic leaders at the recent Democratic National Conventionthat was held in Philadelphia. When Raja getselected, he will be the fourth US Congressmember of the Indian origin after Dalip Singh Saund, (1957-1963), Bobby Jindal (2004-2007) and Dr. Ami Bera (currently serving only Indian American US Congressmember).”

Mr. MVL Prasad, one of the Host Committee Membersintroducing Raja Krishnamoorthi said that Raja was emigrated from New Delhi, India to Buffalo, New York with his parents when he was just three months old. He is the fine role model of the Indian American community who gives highest priority to education. Raja earned his bachelor’s degree with summa cum laude in mechanical engineering from Princeton University and graduated with honors from Harvard Law School. Following law school, Raja clerked for a federal judge in Chicago, served as issues director for Barack Obama’s successful United States Senate campaign in 2004. Raja currently serves as President of Sivananthan Labs and Episolar, Inc., a small businesses that sell products in the national security and renewable energy industries.
Raja Krishnamoorthi while addressing the gathering said that he is very thankful to his parents and very proud of his Indian heritage that instilled principles, discipline, morale, ethics, respect, traditions and values in him. Raja stated that there is a lot of opportunity and room for others to serve the country by entering into mainstream US Politics. He note that Indian American community is doing exceptionally well in the areas like Education, Entrepreneurship, Medicine, Technology, Engineering, Spirituality but is lacking participation in Political arena. Raja stated that while there are more than 3 million Indian Americans in the USA, now there is only Indian American serving as US Congressmember and he will increase that to 100% when he gets elected as US Congressmember this year. Raja sincerely thanked for all contributors in general and the host team Dr. Prasad Thotakura, Paul Pandian, Sridhar Tummala, MVL Prasad and CC Theophine for organizing a successfulfundraiser in Dallas to support him.
CC Theophine, one of the Host Committee Members said Raja was able to raise a whopping $1.6 million more than his opponents and is considered to be a sure shot winner. He urged all US citizens to register to vote so that they should be able to vote in upcoming elections. He requested the gathering to call their Chicago friends to support and vote for Raja. CC thanked all guests for attending and supporting Raja, Prasanthi and Sai Sathish Ganesa for hosting the event, Kishore Kancharla ofBawarchi Indian Restaurant for providing sumptuous dinner, TV5 for media coverage, Mr. Paul Pandian, Sridhar Tummala, MVL Prasad and Dr. Prasad Thotakura for coordinating the fundraising event successfully as Host Committee Team.

Several attendees clarified their questions about the Congressional elections, funding efforts etc. during Q&A session with Raja that was followed by a sumptuous dinner. 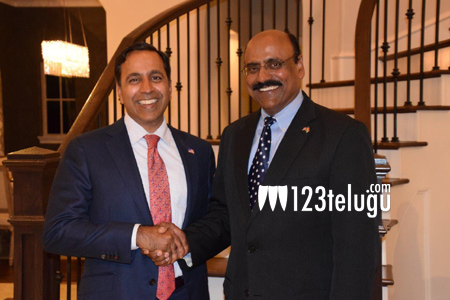 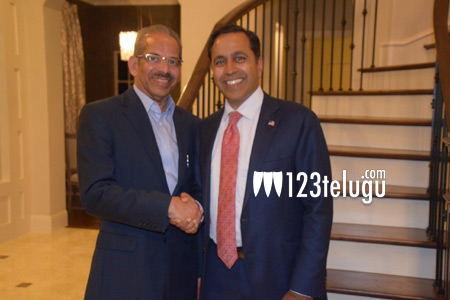 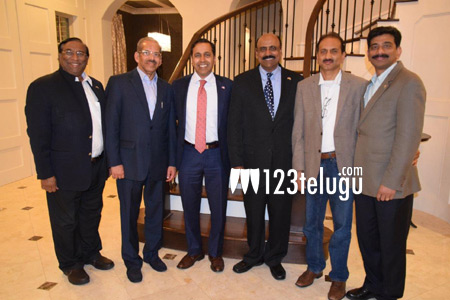 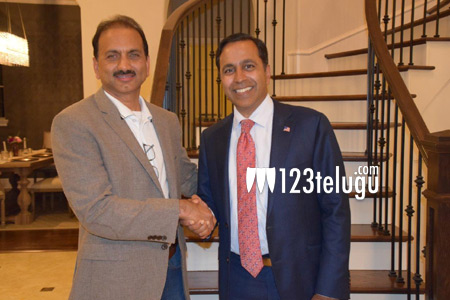 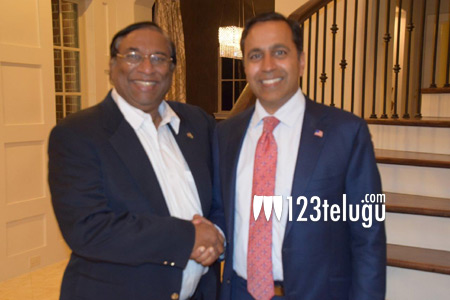