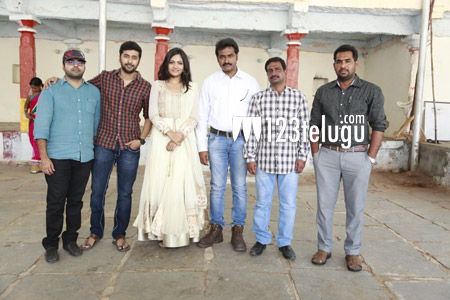 After making his debut with ‘Andhala Rakshasi’, Rahul Ravindran has been endearing himself to movie lovers with his sensible story selection and good movies. He is all set to work in a new movie, which was formally launched in Shamshabad today.

Leela Tata is the heroine in this movie and Ravikiran Chowdhary will be making his debut as a director. He has worked under Gunasekhar before. “Regular shooting will commence in the third week of April and we are very happy with the script. We will be presenting Rahul in a new way with this film. Sekhar Chandra is composing the music for us”, he said.

Rajendra Prasad and Vellala Cheruvu Ravi Kumar will be making their debut as producers with this movie, through their Vaishnavi Creations banner. Speaking on the occasion, producer Vellala Cheruvu Ravi Kumar had this to say, “We are going to produce this movie with a big cast and we are not compromising on production values. The script has come out very well. We will be revealing more details soon”.