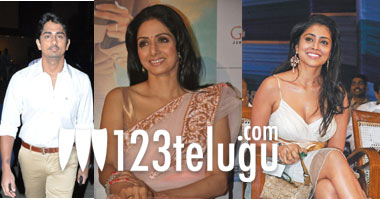 Celebrities from Telugu film industry rarely get the opportunity to attend prestigious film festivals across the world and it’s even more rare to find Telugu films competing in such film festivals. Although no Telugu film has been selected for the ongoing prestigious Toronto International Film Festival in Toronto, Canada, three celebrities Sridevi, Shriya and Siddharth have been officially invited to attend their respective movie premieres at the film festival.

Siddharth and Shriya have already attended the premiere of Deepa Mehta’s Midnight’s Children. The film opened to mixed reviews after it was screened yesterday at the film festival; however, the presence of acclaimed actors like Anupam Kher, Shabana Azmi among many other actors including Shriya and Siddharth has ensured good buzz prior to the film’s screening. Moreover, Salman Rushdie, who wrote the book of the same name, is a former Booker Prize winner and an extremely popular literary figure in the West. On the other hand, Sridevi is going to fly to Toronto tomorrow, along with Gauri Shinde, to attend the premiere of her comeback film English Vinglish. Both the film are in contention for the top prize at Toronto Film Festival.