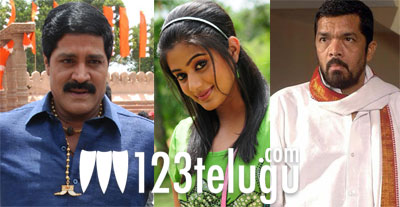 Real Star Dr. Srihari ,Posani and Priyamani have teamed up for the comedy entertainer ‘Thikka’.This movie is being directed and produced by B.R. Duggineni on Bharani Minerals banner. Shooting is largely complete except for two songs and a few sequences. The remaining portions will be filmed from the 22nd of this month.

The movie is going to be released simultaneously in Telugu and Kannada languages and post production work has already started. Rajeev Kanakala ,Siva Reddy, Thagubothu Ramesh, Jeeva and others are playing important characters in the film.

Ramana Gogula is providing the tunes. Srihari and Posani excel in the comedy department so if the director plays his cards well, this should be a decent entertainer.