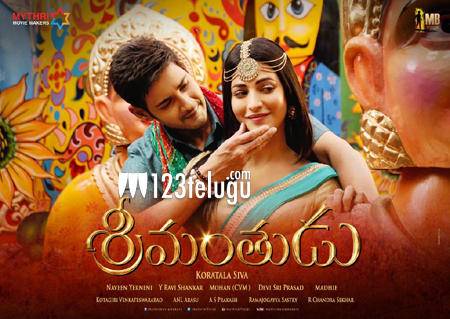 The makers of Superstar Mahesh Babu’s latest blockbuster, Srimanthudu, are planning to organize a grand success event in New Jersey, USA, on 24th October. “New Jersey is densely populated with Telugus, and the response for the film has been phenomenal in the city,” explained the film’s producer Ravi Shankar, revealing the reason behind choosing New Jersey as the venue for this memorable event.

The producer further confirmed that all the cast and crew members, including Mahesh, Shruti Haasan, Jagapati Babu etc, will be taking part in these celebrations. In the US, Srimanthudu had a dream run and amassed nearly $3 million, becoming the highest overseas grosser in Mahesh Babu’s career. And in Telugu states, the film is still running to packed houses on weekends and trade circles are expecting decent collections during the upcoming Vinayaka Chavithi festive season this week.