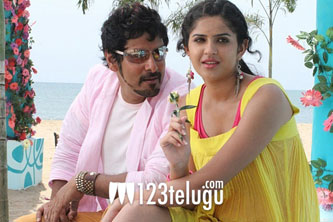 Vikram, Deeksha Seth’s upcoming film Rajapattai is going to be released in Telugu as Veedinthe – By Birth. Suseendran, who had directed Naa Peru Shiva, is directing the film and PVP Cinema is producing the film. The film was recently in news for its songs where Reemma Sen, Shriya Saran and Saloni are going to be seen along with Vikram. This is going to be Deeksha Seth’s debut film in Tamil and it’s turning out to be quite a big film for her.

Vikram plays a gym trainer in the film and after Nanna, this is going to be a complete mass entertainer. K Vishwanath has played an important role in the film. The film is expected to hit the screens simultaneously in Telugu and Tamil on December 16.