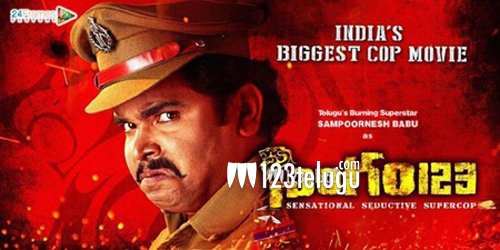 Vishnu Manchu’s 24Frames Factory is riding high on 4 back to back hits this year. ‘CURRENT THEEGA’ is slated to release on the 17th of October. The production house next in the row is Singham 123 with Sampoornesh Babu (Sampoo). Its celebration time for Sampoornesh Babu (sampoo) fans as well, as their favorite star’s​ Singham 123 poster is released today.

This film will be the biggest film of all for the burning star.Film audience can now turn their attention to Singham 123. The film is turning out to be a bigger entertainment package, much more than what he did in his earlier films. And the production team and Direction team are very excited about the script.

Though the core story is under wraps source close to the film unit says it is the next big surprise the star will deliver at the box office. If Hrudaya Kaleyam was a theatre darling, his performance in Singham 123 will stun you even more.

Singham 123 is directed by a new comer Akshat Sharma.The production house will ramp up awareness for the project with a series of posters that showcase the film’s varying environments. This is just one of them (featuring Sampoo and his look in the film) his fans and film buffs can see more of it soon.