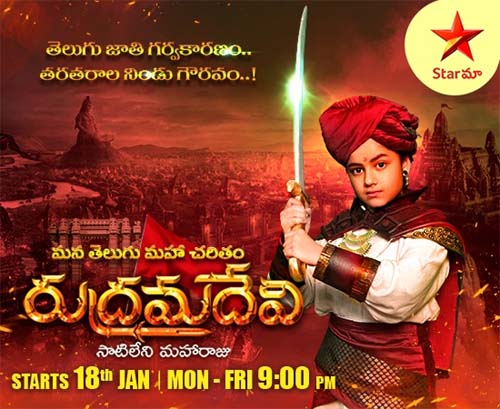 Setting up a New standard in Teleserials- Star Maa comes up with the historic tale of Queen Rudrama Devi.

Known for its novelty in shows and Teleserials, Star Maa is bringing its most prestigious project to date “Rani Rudrama Devi” to the flat screens from the 18th of January.

Star Maa has always tried to find stories that inspire people and responsibly presented them. In an attempt to set a new standard in the Television industry, the channel is now bringing the most inspirational tale of queen Rudrama Devi to the small screen as a daily serial. Being uncompromising in terms of budget as well as technical values, the channel has created this authentic Telugu serial in all its grandeur.

Queen Rudrama Devi, whose story has always been a source of inspiration for many in the Telugu states, is one of the most-fierce warriors that has succeeded to become a ruler at times when even the idea of a woman becoming a ruler was laughable.

The epic journey that is her life, all the struggles that she went through to become a great ruler and to occupy a greater part of Indian history brings nothing but amazement to mind.

This captivating tale that has always been an intriguing part of Telugu history, is coming to the audience from the 18th of January. Tune into Star Maa Channel at 9 PM every day to experience the marvel.