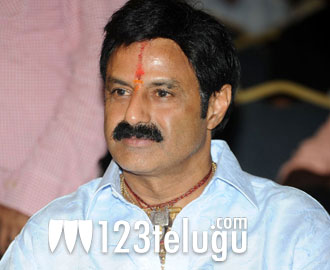 Basking in the glory of Sri Rama Rajyam success, hero Balakrshna reserved his comments when asked about his political ambitions.

“No comments”, was his cryptic remark to a question on his future role in politics. He was in Rajahmudry attending a health camp from where he would head to Manchu Manoj starrer film shooting “U kodatara Ullikki Padathara”.

“I will act in mythological films if producers with good taste come forward and take up such ventures,” he said and thanked the public for the support and appreciation given to Sri Rama Rajyam.

Ever since TDP President N Chandrababu Naidu took over the reins of the Party overthrowing NTR, he tried to keep the family with him. In the 2009 elections Balakrishna and Jr NTR were given a prominent role in campaigning but the party fell short of the needed majority.

Balakrishna resorted to some his film histrionics and evoked good response from the crowd. Much before that, NTR once named Balakrishna as his political heir, a matter which was hushed up as such statements do not go well in public life and in a democracy.

Chandrababu Naidu further cemented the relations with his son Lokesh marrying Balakrishna’s daughter Brahmani and Jr NTR marrying his niece Pranati laying good ground for the next generation and making it an all-in-the-family affair. (INN)