Review : Aanandam – Works only in parts 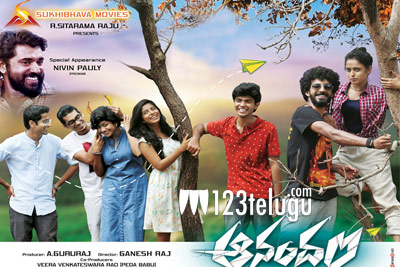 The Telugu dubbed version of Malayalam super hit Aanandam has hit the big screens today. The movie promises to be a youthful entertainer with a young star cast. Let us see whether it lives up its expectations or not.

The movie revolves around a group of 6 students who go on a college tour. Akshay(Thomas Mathew), Arun( Varun Kuriyan), Gautham(Roshan), Ramkee(Vishak), Dia(Siddhi), and Devi(Annu Antony ) find their real selves in the process. The troubles they face during the trip, the love they have towards each other and the way they reinvent themselves form the rest of the story.

The young actors did a fine job in keeping things simple. Their realistic performance is a major asset for the film. Especially, Siddhi and Roshan came up with some great performances and bring depth to the movie.

The second half is filled with emotional scenes that have been carved out well. The process of engineering students exploring themselves in the trip has been written and executed well.

A lot of detailing has been given to the main characters and that adds extra depth to the movie. Many scenes look realistic and stays true to the actual plot.

The movie starts off on a dull note and lacks proper intent for a good 15-20 minutes into the first half. A few episodes in the pre-interval block look unconvincing and may put off the viewers.

A find the treasure game played among the students lasts for a bit too long in the first half. These scenes tamper the flow and take forever to enter the actual storyline.

The comedy in the initial stages does not come out well and that takes a toll on the pace of the film. Vishak’s role goes a tad overboard in few scenes and may not connect well with the native audience.

The director, Ganesh Raj wrote a simple storyline and does not engage much with his narration. His detailing of characters and the way he mixes western culture to the proceedings look good.

The music is the soul of this of this movie. Sachin Warrier came up with a really impressive background score. His orchestral approach to the climax comes off well. The soothing soundtrack helps in elevating the emotions in the second half.

The camera works look sleek and the beauty of some iconic places in Hampi and Goa have been captured well. The production values are rich and that is clearly visible on the big screen.

On the Whole, Aanandam is a simple youthful entertainer that runs mainly on emotions. The main plot is very simple and rolls back the college days memories for the viewers. However, it has its own share of flaws as the first half is quite ill-paced and boring. Things are covered up at the end but by then it is too late. Lack of known faces and predictable nature of the plot makes this film yet another below average fare this weekend.