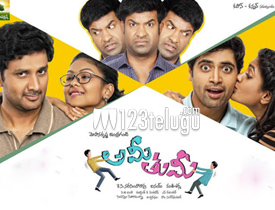 Mohana Krishna Indraganti’s Ami Tumi has been promoted quite well in the last few days. The comedy caper featuring Vennela Kishore, Adivi Sesh and Srinivasa Avasarala has hit the screens today. Let’s see how it is.

Gangadhar Rao(Tanikella Bharani) is strictly against his daughter’s(Esha) affair with Ananth(Adivi Sesh) and fixes her marriage with Sreechilipi(Vennela Kishore). This is also the time when Gangadhar’s son(Srinivasa Avasarala) is in love with his enemy’s daughter Maaya(Aditi).

Upset with his kids, Gangadhar locks his daughter inside a room and kicks his son out of his house. Rest of the story is as to how the brother-sister duo manages to evade Sree Chilipi and get married to their respected lovers.

Vennela Kishore has been shining brightly in every film of his of late, but his comedy is to another level in Ami Tumi. Right after he enters the scene, Kishore’s punch dialogues, subtle mannerisms, and his chemistry with his love interest in the film are to die for. Kishore’s satirical comedy and the way he uses funny English phrases in the form of punches are hilarious. With this film, his popularity will surely go to another level.

Tannikella Bharani brings a lot of depth to the proceedings and is very good as the strict father. The film has good comedy throughout as the director Mohana Krishna nicely adds good entertaining moments in both the halves. The mistaken identity comedy and the comedy track that he has written for Vennela Kishore works quite well.

The climax of the film is also decent and ends on a positive note. The actress who plays Vennela Kishore’s love interest in the film also does a tremendous job as her act brings a lot of humor in the film. Eesha Rebba is good as the Telangana girl.

The first ten to twelve minutes of the film start on a very slow note. The way the characters are introduced and their loud acting can put you off most of the time. The film clearly has some loud and slapstick comedy which may not go well with the mass audience.

Even though the film is a comedy caper, the way certain characters behave makes the film quite silly at times. Srinivasa Avasarala and Adavi Sesh do their job well but are hardly there in the film.

Production values are pretty good as the film looks neat and visually entertaining. Dialogues by Mohana Krishna are yet another huge asset for the film as they have been written with a lot of satirical humour. Editing is decent and so was the background score. Luckily, Mani Sharma’s music goes with the flow and does not obstruct the proceedings. Camera work by P G Vinda is pretty good even though he had less scope to showcase his talent as the film is set mostly in very few locations.

Coming to the director Mohana Krishna, he has done an impressive job with the film. With a less number of characters, he has made the proceedings quite interesting as his screenplay is quite crisp and to the point. The way he generates comedy through Vennela Kishore’s character and adds good fun at regular interval is nice.

On the whole, Ami Tumi is a very healthy comedy which has some entertaining moments throughout. The film will especially do well at the A centers because of its urban comedy touch. Vennela Kishore is the star as he makes this film which has a simple and predictable story line quite enjoyable with his hilarious performance as Sree Chipili. Watch it for him.