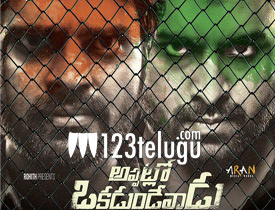 Nara Rohit has been churning out films one after the other. His latest presentation is Appatlo Okadundevadu which also has Sree Vishnu in yet another important role. The intense drama has hit the screens today and lets now see how it is.

Railway Raju(Sree Vishnu) is an upcoming cricketer who gets embroiled in a deadly case of naxals because of his sister. The case is handled by a fierce police officer called Imtiaz Ali(Nara Rohit) who troubles Railway Raju big time.

In order to escape from all these tricky situations, Railway Raju unexpectedly commits a huge crime which lands him in jail. There, he decides upon himself to take revenge on Imtiaz Ali at any cost. Rest of the story is as to how Railway Raju encounters the mighty Imtiaz Ali.

Nara Rohit plays his role of a police officer perfectly. You can easily say that Rohit’s role is more of an supporting actor in this film and he brings a lot of depth to the proceedings with his stylish diction and serious attitude. The last fifteen minutes of the film are quite gripping with some very good emotional twists.

Sree Vishnu is the mainstay of the film and is very good as Railway Raju. His performance is top notch during the first half and he is an actor to watch out for. Taniya Hope makes a decent debut and suits her role quite well.

The first half of the film starts on an impressive note. Some scenes featuring Sree Vishnu’s investigation through a cricket match has been executed superbly. Brahmaji gets an important role and ably supports Sree Vishnu. The second half has some gripping moments like the confrontational scenes of Rohit and Sree Vishnu.

All those who think this is a Nara Rohit film will be hugely disappointed as he has very fewer scenes. The entire story of the film is based on Sree Vishnu. Even though the story idea is good, the way it has been executed in certain areas is below par.

Rajeev Kanakala’s entry and the way Sree Vishnu’s emergence in the crime world is shown looks a bit over the top and hurried up. Some basic emotions are missing during this time as the film becomes a bit slow. The film takes its own sweet time and all those who expect some fun will be highly disappointed.

The visuals are quite brilliant and the way the happenings during the 90’s and the naxal set up is added in the story is quite impressive. Music by Sai Karthik is below average. But the background score is excellent. The screenplay of the film is very impressive and gets engaging as the climax is ended with a good twist.

Coming to the director Sagar Chandra, he has done a good job with the film. He chooses quite an interesting story and nicely sets it up between two characters and does not unnecessarily elevate anyone for commercial reasons and sticks to the story. He falters slightly during the second half but he makes it up with an emotional climax which forms the life of the film.

Appatlao Okadundevadu is a film which has some very engaging and emotional moments. Credit should go to Nara Rohit for backing a script like this and even agreeing to do a supporting role which sticks to the story. The surprise package of the film is Sree Vishnu who gives an aspiring performance. This is not a regular popcorn entertainer and will only impress its target audience. All those who like realistic films with some hard hitting drama can happily give this film a shot this weekend.