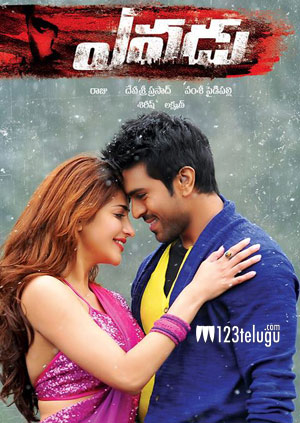 Mega Power Star Ram Charan is gearing up to hit the screens with ‘Yevadu’. The movie is expected to be an action thriller and Vamshi Paidipally is the director. Shruti Haasan and Amy Jackson will be seen as the female leads. The audio album of the film was launched yesterday at a star studded ceremony and Devi Sri scored the music. Let us check out the audio album now.

‘Freedom’ will most likely be the first song for the hero in the film. Krishna Chaitanya has penned the lyrics for this song and he has done a neat job. The song talks about the free spirited nature of the young generation. Suchith Suresan has done a good job with the vocals. DSP’s music has good pace and western instruments dominate the soundtrack. Overall, ‘Freedom’ is a decent number to listen to.

‘Nee Jathaga’ is a melodious romantic duet. Karthik and Shreya Ghoshal have taken care of the vocals and they have done a very good job. Shreya Ghoshal’s lovely voice is a big asset for this number. Sirivennela Seetharama Sastry’s lyrics are poetic. Devi Sri’s music is very good here. The songs opens with good guitar work and the synthesizer takes over after that. The song is very easy to like and it will undoubtedly become quite popular.

‘Ayyo Papam’ is the item song of this movie and it has the potential to become a massively popular number in B and C centers. The song has very good pace and the rustic beats composed by Devi Sri give this song a very earthy feel. Ramajogayya Sastry’s lyrics are appropriate for the song. Mamata Sharma has done a very good job with the vocals and she has infused great energy into her performance. Ranjith complements her efforts well.

‘Cheliya Cheliya’ is a solo number that has been rendered by KK. The song’s music is slightly similar to ‘Brathakaali’ from ‘Ooseravalli’. Chandrabose has penned the lyrics for this song. The song describes the intense feeling of sadness and anguish experienced by the hero after being separated from his lady love. The song is decent to listen to and going by the lyrics, it will come in at a very crucial moment in the film.

‘Oye Oye’ is a romantic duet. David Simon and Andrea have taken care of the vocals. Sri Mani has penned the lyrics and they are very mediocre. DPS’s musical score is strictly ok for this song and there is nothing remarkable to talk about. Overall, this is a very average song that might work only if it has good dance moves from Charan.

‘Pimple Dimple’ is one more mass number from this album. The song has good pace and the music is aimed at the front benchers. Sagar and Ranina Reddy have done a decent job with the vocals. Ramajogiyya Sastry’s lyrics are very mediocre. DSP has come up with rustic beats and earthy notes for this song. ‘Pimple Dimple’ will work well with the masses.

Just like many of Ram Charan’s films, the audio album of ‘Yevadu’ is also a mass entertainer. Devi Sri Prasad has done a decent job, but he has also played a very safe game. You can compare this album to a Toyota. It will not stun and shock anyone, but it will not offend them either. It will also sell in large numbers.The audio album of ‘Yevadu’ will appease fans and the tunes provide good scope for Charan to showcase his dancing abilities. ‘Nee Jathaga’, ‘Ayyo Papam’ and ‘Cheliya Cheliya’ are my picks from this album.