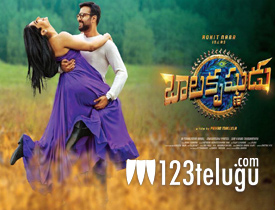 Nara Rohit is one actor, who is churning out films in quick succession. His latest presentation is Balakrishnudu which is directed by Pawan Mallela. The action entertainer has hit the screens today. Let’s see how it is.

Balu(Nara Rohit) is a conman who is given the responsibility of safe guarding Aadhya(Regina) from a dreaded faction group in Rayalaseema. The villain gang chases Aadhya and Balu keeps saving her all the time and safely takes her to her family. Well, how did he do this is the whole film all about.

One of the biggest plus points of the film is Prudhvi’s comedy. He enters the scene right before the interval and keeps entertaining with his energetic performance. Nara Rohit is decent in his part and plays it to the galleries.

Regina provides the necessary eye candy and is a good support for Rohit. The first ten minutes of the film which showcases the faction set up has been established quite well.

Srinivasa Reddy is okay with his comedy and so were the supporting cast. Ajay gets a meaty role and he is the main stay of the film.

One of the biggest drawbacks of the film is the age old story line. The script has been tried and tested in many films to date and we wonder how Nara Rohit has approved such a routine storyline.

Post the first ten minutes, the film takes wayward direction and goes on forever. So many unnecessary characters enter the scene creating a lot of disturbance to the proceedings. There is absolutely no seriousness as most of the scenes look silly.

Nara Rohit’s role has no clarity and his whereabouts have not been explained well. Ramya Krishna is just a spectator in the film as her role has been sidelined post the first ten minutes.

Production values of the film are pretty decent and so was the camerawork with showcased the action set up in a decent manner. Dialogues are just about okay and so was the art direction. The screenplay of the film is outdated and has nothing interesting to showcase.

Coming to the director Pavan Mallela, he has done a below average job with the film. When Telugu cinema is changing drastically with new concepts, he chooses a script which is quite old and routine.

On the whole, Balakrishnudu is a routine commercial entertainer which has nothing new to showcase. Age old story line and predictable proceedings kill the film most of the time. If you are the one who likes masala stuff with a pinch of comedy thrown in here and there, Balakrishnudu is for you but the rest can explore other releases this week.