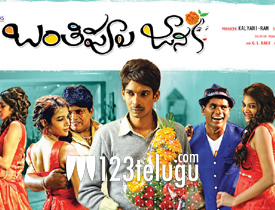 Starring : Dhanraj, Deeksha Panth and others

Deeksha Panth (Janaki) is an actress who gets a national award for her latest film Banthipoola Janaki. To celebrate her award, the film’s hero Akash (Sudigali Sudheer), writer Miriyalu (Raghava), producer Bangarayya (Raghu) and director Ahamkaram (Chammak Chandra) plan to surprise Janaki. They gang up at a bungalow and begin their celebrations.

In a shocking twist, they all die accidentally in the hands of Janaki. The rest of the story is all about how Janaki escapes from these murders with the help of her friend and manager Shyam (Dhanraj).

The basic plus point of Banthipoola Janaki are the comedy scenes between Jabardasth actors Sudigali Sudheer, Raghava, Raghu and Chammak Chandra. Raghu is quite good with his typical dialogue delivery. The interval twist is effective. Dhanraj puts in his sincere efforts in a misfitting role that has no comedy.

The major minus point in this comedy thriller is the lack of a coherent story and screenplay. The narrative of this film is pale and insipid as the makers stretched out the thin storyline beyond the point of boredom. There’s neither seriousness nor comic relief in the scenes that show Janaki’s efforts to hide the accidental murders.

The entire story revolves around the heroine, and Deeksha Panth fails to score with her unimpressive act. Her performance in the climax scenes leaves a lot to be desired. The item song that flashes in the pre-climax mars the proceedings to a great extent. All the director’s efforts to engage the audience in the name of comedy end up boring them. Scenes involving the cop and Shakalaka Shankar lack justification.

Director Praveen Chandar utterly fails in putting up even an average show thanks to his poor and silly comedy scenes, which are carpeted throughout the 90-minute duration of the film. The cinematography is decent but the rest of the technical departments including editing and music are pretty stale. The production values are satisfactory.

Banthipoola Janaki suffers majorly due to its silliness and zero logic in writing. Except for a few comedy scenes featuring the Jabardasth comedians, there’s hardly anything to rave about. Also, the lack of riveting thrills makes this thriller end up as a boring watch this weekend.