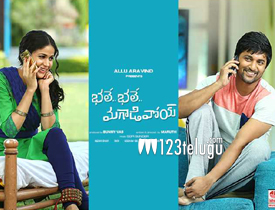 Talented director ​Maruthi, ​has joined hands with the charismatic Nani for a romantic entertainer titled Bhale Bhale Magadivoy. Also starring Lavanya Tripathi as the female lead, this film has hit the screens today. Let’s see how it is.

Lucky (Nani) is a happy go lucky guy who suffers from mild memory loss. Because of this problem, Lucky ends up loosing a well to do marriage proposal. As time passes by, he spots Nandana(Lavanya) and falls in love with her. Lucky starts wooing her and every time he gets into trouble because of his memory loss, he lies to Nandana and escapes the situation.

Twist in the tale arises when Lucky meets Nandana’s dad who happens to be the same person who approached him for his daughter’s match. What will Lucky do now ? How will he manage both Nandana and her dad ? That forms the rest of the story.

Right from the first frame, it is Nani’s histrionics which holds the film together. Once again, Nani proves what a powerhouse of talent he is and excels in his role. Films like these are Nani’s territory and he should more often do such entertainers. Nani makes you empathize with his character and also evokes superb comedy at the same time. With BBM, Nani’s stardom is set to take a ‘U’ turn and push him to the top league of actors.

Credit should also go to Maruthi for etching out a clean entertainer. The creative director never fails to surprise and entertains you till the last five minutes. The surprise package of the film is Murali Sharma who is generally associated with negative roles. He does a marvelous job as Lavayna’s father and all his scenes with Nani are etched out well.

There is a huge doses of comedy and all the various episodes featuring Vennela Kishore and Srinivas Reddy have been executed superbly. The romance that is showcased between the lead pair has also come out well. Lavanya Tripathi looks adorable and is superb as Nandana. Her chemistry with Nani is endearing and brings a feel good effect to the film.

Climax is a let down as Maruthi chooses a very cleashed and ordinary ending. He could have ended the film on a simple note but chooses the typical commercial path and adds unnecessary fights and silly thrills. Ajay’s character looks forced and goes over the top many a times.

The conflict point of the film is hurried on during the pre-climax. Certain logics regarding the memory loss concept have been overlooked in the film. The title song of the film could have been totally removed to make the film crisp.

Gopi Sundar’s music is soothing and his background score is yet another highlight of the film. Dialogues are clean and evoke superb fun. Screenplay by Maruthi is gripping as the film has several hilarious moments which connect well. Editing is neat and makes up for a crisp narration. Camerawork and production values by GA2 are superb.

Coming to the director Maruthi, he has done a stunning job with the film. The way he has induced entertainment through hero’s characterization make the proceedings joyful. With BBM, Maruthi silences his critics and delivers a winner.

On the whole, Bhale Bhale Magadivoy is a hilarious entertainer which will be loved by one and all. Nani’s stunning performance and the non stop entertainment are major assets of the film. If you manage to ignore certain logics and a cleashed climax, this film will entertain you right till the end and is not to be missed.