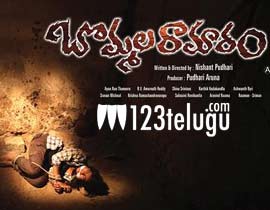 Ramanna (Priyadarshi) is a small-time feudal lord in Bommala Ramaram village. Being a cruel man that he is, Ramanna keeps his father’s dead body for over two days just for the sake of property. One fine day, Ramanna sets his eyes on his ancestral property as well as his late father’s MLA post.

In this process, Ramanna takes help of Soori(Soori) who leads life by mediating settlements in the village. Ramanna faces a series of issues with village authorities and this leads to Soori’s imprisonment in a murder case. The rest of the story is all about how the lives of these two people who chose the path of crime end.

The major plus point in Bommala Ramaram is the feudal crime drama which is set in a rural backdrop. The debutante director comes up with interesting characters which travel the path of crime. Certain scenes featuring the hero and his friends in the first half, the pre-climax and climax have been executed well.

The relatively new cast featuring Soori, Priya Reddy and Priyadarshi manage to impress the audience. Priyadarshi emotes quite well in a villainous role even though his physique and diction didn’t suit the character.

Apart from the main plot and a interesting rural backdrop, lack of a strong story ends up being the major minus point of the film. Several scenes in the first half and during the interval have been scripted incoherently. Uma Devi’s character lacks clarity.

Songs in the film’s second half act as major speed breakers and dilute the mood. The story never progresses until pre-climax. Apart from the main leads, the rest of the actors don’t make any impact.

BV Amarnath Reddy’s cinematography scores high among the rest of the technical departments in Bommala Ramaram. The DOP created the right mood with his realistic lighting in the pre-climax and climax scenes. Krishna Maya’s art direction is impressive. A couple of songs scored by Karthik Kodakandla are good but his background score leaves a lot to be desired. Editing is one of the major minuses in the film.

Coming to the debut director Nishanth Pudhari, after setting up his story in an interesting backdrop, he fails to weave an effective screenplay.

Crime drama is a challenging genre and it requires a great command and clarity over story and its characters. Debutante Nishanth Pudhari chose to tread a challenging path for his first film but fails in the screenplay department with lack of clarity and ends up making a half-baked crime drama.