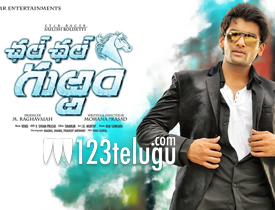 Manohar (Sailendra) is a talented IT professional. He juggles two companies and works day and nights due to reasons better known to himself. What made Manohar join two shifts ? What does he do with his earnings ? How does he manage two jobs and where do Disksha Pant and Angana Rai feature in this setup ? That forms the rest of the story.

The flashback episode is quite good. Nagababu’s performance in this episode is impressive with sensible dialogues. Young hero Sailendra tried all that he could to project himself as a commercial hero and does a decent job. His screen presence is good.

Both the heroines had nothing much to do in the narrative, but they sizzled with their glamor treat. The humor that is evoked in the scenes where the hero manages both his jobs at once offers some relief.

Lack of strong story and screenplay are the major drawbacks of this movie. Even though the emotional scenes in the flashback episodes offer some depth to the proceedings, rest of the movie falls flat with no emotions. A simple plot of hero working two shifts to earn extra money has been stretched into a two hour long, boring narrative.

Certain scenes confuse the audience as one can’t understand how they begin or end. Almost all the songs are irrelevant to the narrative and are also unpleasant to the ear. Forced comedy tracks make the film suffer big time.

Director Mohana Prasad fails to weave an interesting narrative. His flat writing and execution are evident in most scenes. Editing is shabby and so are the songs and background score. The cinematography is okay and the production values are decent. The art direction looks okay.

Small films which lack the usual publicity blitzkrieg need a strong story to arrest the audiences. The makers of Chal Chal Gurram ignored this aspect which has affected the movie’s prospects at the box-office. The lackluster story and disappointing execution make this film run at a snail’s pace thereby making it a difficult ride for the audience this week.