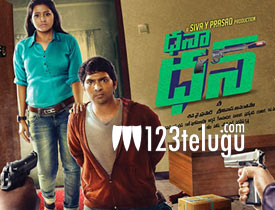 A dubbed version of the 2014 Tamil film Damaal Dumeel has hit the screens with the title Dhana Dhan. Starring Vaibhav and Remya, let’s see how the Telugu version fared.

Moneykandan (Vaibhav) is an IT employee who spells his name as “Money”. He is a strong believer in numerology and like his name, money is the driving force of his life. His life gets a jolt when he suddenly loses his job.

As time passes by, he receives a box containing 5 Crores which get delivered to him accidentally. The money is actually part of a settlement deal between bad guys Veerabhadram (Kota Srinivas Rao) and Kamatchi Sundaram (Sayaji Shinde).

Taking the situation in control, Moneykandan decides to run away with the money and start a new life. But as expected, he gets caught in a huge mix up with the bad guys. Rest of the story is as to how he comes out of these problems.

One of the driving points of the film is the story that the film revolves around. With ample amounts of twists, the screenplay is decent in many areas. The movie is racy and short which works in its favour.

Performance wise, Vaibhav takes the cake as he is at ease and pulls off his role to the tee. Remya, a well known face in Malyalam films does an okay job and performs within her limitations. Kota Srinivasa Rao and Sayaji Shinde’s experience can be seen on-screen.

Even though the story is interesting, it could have been executed in a more exciting manner. The director had the right elements in mind but failed to translate it successfully on-screen. The twists showcased become a little predictable.

Some of the clever ideas in the plot have not been executed properly. As the film is a dark comedy, not everyone might find it entertaining. The romantic angle is also not explored properly and Remya becomes a side actor for the most part.

Towards the end, the flick starts to loose its steam and the happenings are taken too lightly. Also, the dubbing done is below par.

Though the film is made within a small budget, the production values are exceptional. Music by Thaman, especially the background score is superb. Editing is decent but camera work is nothing great to talk about. Dialogues on the other hand could have been better.

Coming to director Shree, he succeeds in choosing a story that is engaging. But it is his execution that is below par and gets the proceedings off track after a while.

On the whole, Dhana Dhan is a dark comedy that will appeal to a particular section of audience only. Although the performances and story are decent, the hasty execution lets down the film completely making it just a below average affair at the box office. Watch it when it comes on TV.