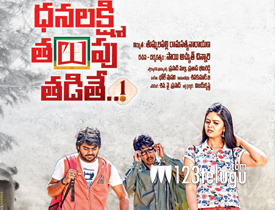 Comedian Dhanraj has come a long way in his career. He has reached a stage where has co-produced this week’s comedy thriller Dhanalakshmi Talupu Tadithe which has hit the screens with a decent buzz. Let’s see how it is.

Ranadhir(Ranadhir) and Srimukhi are professional kidnappers who kidnap minister Vasundhara’s(Sindhu Tholani) niece and demand one crore from her. Left with no choice, Vasundhara agrees to these demands and gets ready with the money.

An excited Ranadhir and Srimukhi start their journey to meet the minister. Unfortunately, they meet with an accident and the little girl gets lost in the transit. This is also the time when Kodi(Dhanraj) and three of his friends find the girl and handover her to the minister. An overwhelmed Vasundhara hands over the one crore cash to Kodi and his gang and leaves with the girl.

The happy gang takes the money and kick starts their journey without having any knowledge of what is in store for them next. Rest of the story is as to how this group comes out of their problems and save their lives from the evil clutches of Ranadhir and others.

One of the biggest asset of the film is the first forty minutes. These moments engross you into the proceedings with a lot of thrill and entertainment. Also, the problems which arise when a lot of money is involved have been shown exceptionally well. Naga Babu is pretty good in his cameo and imitates Pawan Kalyan well.

Coming to the performances, Dhanraj has done a wonderful job in the film. He balances both the emotions and comedy touch with aplomb. The talented comedian is specially good in the spoof episode of Pirates of the Caribbean. Srimukhi does well as a lady thief and so were Manoj, Anil and Vijay in their respective roles.

As said earlier, the first forty minutes and the last twenty minutes of the film provide decent entertainment. Tagubothu Ramesh does well in his role and the crisp run time also helps matters much.

After engaging the audience to a decent level in the beginning, the film gets bogged down a bit. The proceedings get predictable and some unnecessary scenes take center stage. Even though the Pirates of the Caribbean episode evokes decent laughs, it side tracks the movie completely.

There are many logics which go missing in the film. Scenes featuring the forest set up and the characters which come in during this time lack clarity. After highlighting Ranadhir’s character such effectively during the first half, he gets diluted by the time the movie ends. As expected, there is not much comedy in the film which might go against certain expectations.

Camera work in the film is quite decent and showcases the locations well. Bole Shah Vali’s music is decent and his back ground score during the initial forty minutes is quite impressive. Editing by Siva Prasad is pretty ok but gets bogged down after the initial half an hour.

Coming to the director Sai Achyut Chinnari, he has done a decent job with his debut film and manages to engross the audience to a decent level. His dialogues and screenplay are promising but are left half way through after such an impressive start.

On the whole, Dhanalakshmi Talupu Tadite is a surprisingly decent film. There are a lot of thrills which entertain the audience most of the time. Dhanjaraj can be credited for believing in the script and putting a lot of money into this project. If you ignore the flat half an hour pre and post interval, you can easily give this comedy thriller a shot without any hesitation.