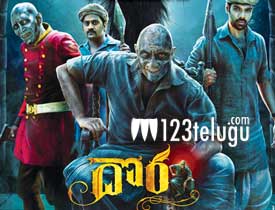 Riding on the bandwagon of horror comedy flicks, one more Tamil dubbed flick titled Dora has hit the screens today. A dubbed version of Jackson Durai, the film stars father-son duo Sibiraj and Sathyaraj. Let’s see how it fares.

For centuries, a unique palace in a village called Dorapuram has been haunted by ghosts. Police officer Satya (Sibiraj) is sent on an assignment to find out the truth behind this.

When Satya reaches Dorapuram and starts searching for clues, he befriends Viji (Bindu Madhavi) and falls in love with her. Viji’s cousin Veera (Karunakaran) is also in love with Viji and is keen on marrying her as well.

When Satya asks Viji’s father to marry his daughter, he challenges Satya and Veera to survive seven days in the haunted bungalow. Satya and Veera move into the bungalow and start experiencing paranormal activities immediately.

Will Satya and Veera survive these seven days? What is the reason behind these paranormal events? How is Satyaraj related to all this? These questions form the crux of the story.

The biggest asset of Dora is the comedy that is infused in the film. The comedy is the only saving grace of the film, and it manages to pass on a few chuckles.

Sibiraj is strictly average. Satyaraj tries his best within the limitations of his poorly etched role. Bindhu Madhavi is just okay in a character that lacks clarity. Comedian Karunakaran takes the icing as his comedy timing is surprisingly entertaining.

The film possesses a unique concept, and the makers should be appreciated for trying something that is out-of-the-box. The pre-interval episode is the biggest highlight of the film.

The biggest letdown of Dora is the concept itself. Although it sounds impressive on paper, the director has completely failed in translating it properly on the big screen. The film lacks clarity and gets stuck trying to be an infusion between horror and comedy.

The reason behind the challenge and the haunting is poorly explained. The second half is also a drag and bores the audience big time. The movie also takes its own time to get the actual story rolling. The story is filled with loopholes that are just overlooked.

The flashback episode messes up the flow of the film. The run time could have been cut down considerably. The film is also abruptly ended and fails to explain the loose ends.

The production values of the film are strictly average. Background music by Siddharth Vipin is mediocre at best. Editing is a let-down. Camera work is acceptable. Dialogues are just average.

Coming to director Dharani Dharan, although it should be appreciated that he choose a unique concept, he fails in making the most of the opportunity. It seemed like Dharani couldn’t decide between a horror or comedy film and adds everything he could. The film lacks clarity and is jumbled into one big mess by the time it reaches climax. A more logical story line with proper thrills could have made the movie entertaining.

On the whole, Dora is a poorly executed film. The cross between horror and comedy is improper and this shows up clearly on the big screen. Although a few comic scenes are entertaining, the rest of the film is jumbled up into one big mess and can be ignored this weekend.