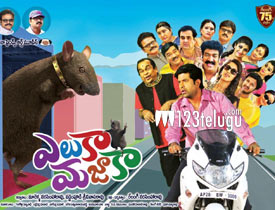 Until more than a decade ago, veteran director Relangi Narasimharao was a name to reckon with. The director is back after a long gap with yet another comedy Eluka Majaka, his 75th project. The film stars comedy king Brahmanandam and Vennela Kishore in pivotal roles. Let’s see how the film fared.

How Vennela Kishore, who is already facing several troubles thanks to his strict father-in-law, comes out of the mess created by the mouse, forms the rest of the story.

The one and only major plus point in the film is the story. There is a lot of scope for comedy in the story line and a majority of the film’s story revolves around Brahmanandam and Vennela Kishore.

Both these actors excelled in their respective roles and brought some respite. Raghu Babu’s ‘Kundabaddalu Kotti Cheptunna’ mannerism will surely be a hit with the masses.

Even though the the film has a novel story line, the scenes that are knotted in the screenplay do not excite much. The scenes where the mouse causes trouble to Vennela Kishore bore the audiences big time.

An item song featuring a servant maid appears from nowhere, leaving the audiences clueless. There is a consistent feeling of monotony in the proceedings. The much hyped 40 minute VFX fail to excite the audiences. The film’s lengthy duration is yet another minus.

Cinematography is decent. Except for the title track, songs fail to score the brownie points. Editing is haphazard, while the visual effects don’t amaze the audiences.

The makers of Eluka Majaka promoted the film as a full fledged entertainer, but surprisingly, the film ends up as a half-baked comedy. Barring the novel story line, there is hardly any interesting factor to watch out for in the film. Ignore it this weekend.