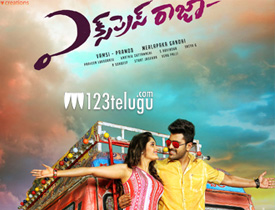 Yet another much awaited movie of this Sankranthi season, Express Raja has hit the screens today. The movie gained a lot of buzz when Sharwanand joined hands with director Merlapaka Gandhi and UV Creations. Let’s now see how the film turns out to be.

Raja(Sharwanad) is the reckless son of an honest father who does a lot of social service. Along with his cousin Seenu (Prabhas Seenu), he spends his days drinking and causing trouble despite being insulted by his father numerous times.

One fine day, Raja spots Ammu(Surabhi) and falls head over heels for her. He even kidnaps a small puppy to impress her. Post this kidnapping, hell breaks loose as different characters start entering the scene and cause even more confusion in the plot.

Who are these characters ? How are they connected to each other ? and What happens to Raja’s love story ? To know answers to these questions, you need to watch the film on the big screen.

The hero of this story is definitely the way in which all the characters are interwoven with each other The comic timing of the entire cast and their roles are not just utilized to the core but also form the crux of the movie.

Sharwanand is in his usual best and effortlessly slips into his character of a reckless guy who falls in love. He proves a point with his comic timing which is quite effortless. Surabhi looks beautiful and showcases good acting skills. Urvasi is seen here after Size Zero and is one of the major entertainers during the second half. All her comic scenes are hilarious.

Sapthagiri and Prabhas Seenu have competed against each other in delivering punch lines and giggles one after the other. Supreet also is refreshingly seen delivering a comedy oriented performance and that too with some good dialogue delivery. While the first half moves at a decent pace, the entire second half is filled with a lot of suspense and takes new turns with every scene.

While the movie is definitely an entertainer, logically there are a few loopholes in the plot. Although the sub plots are all woven in a fantastic way, the main theme of the film seems vague.

The quest for all the things that are happening seems a little unrealistic. The love story between Shrawanad and Surbhi is a little short and the latter does not have much screen time to showcase her abilities.

Merlapaka Gandhi’s direction is very good with respect to handling the numerous characters in a deft way. His story telling is neat as he does not waste much screen time for any of his characters.

UV creations which is known for its production values are back with a decent craft this time. Praveen Lakkaraju’s tunes are catchy and the picturization of the songs is quite quirky and fun.

On the whole, Express Raja is a thorough entertainer sprinkled with loads of laughter. The comic timing of the actors and their performance is the major highlight of the film. On the flip side, there in not much logic and also the love story between the lead pair is a bit disappointing. Finally, if you want to leave your brains behind and have a really good laugh with some hilarious punches, then go watch Express Raja.