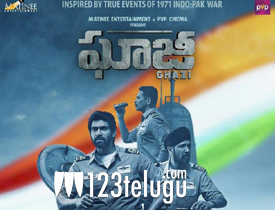 Ghazi has become the talk of the town as it is the first underwater war drama that has been made on Telugu screen. Debuted by Sankalp Reddy, this film features Rana, KK Menon and Atul Kulkarni. Let’s see how it is.

The film is set during the early 70’s when Pakistan army sends a special submarine called Ghazi to help its soldiers who are fighting a war with Bangladesh. The only way that Ghazi can reach Bangladesh is through Indian waters and also by destroying the mighty Indian warship INS Vikranth which stands in its way.

This news is carried on to the Indian authorities trough some crucial intelligence reports. In order to tackle the deadly Ghazi, the Indian navy deploys the S-21 submarine which is managed by some able officers like Arjun Varma(Rana Daggubbatti). Rest of the story is as to how the entire team of S-21 stay underwater for days and manage to fight the deadly Ghazi.

The entire team of PVP cinema and Matinee entertainments should be credited for believing in a film like Ghazi and taking it on floors. One can easily say that a film like this has not been made on Indian screens to date. The way real life events have been narrated with a bit of fiction is very good and showcases the caliber of the young director.

Rana Daggubatti has become the go-to man for different films like these. He not only has given the film a huge market but has also proved his mettle as an actor in Ghazi. Right from his look to his emotional performance, Rana stands on top and carries the film on his shoulders. Ghazi has an efficient supporting cast in the form of K K Menon, Atul Kulkarni and Satyadev who have given a standout performance. The film would not have come out the way it did if not for these brilliant actors.

The underlying drama that has been showcased between the lead cast in crunch wartime holds the film together. The entire first half is filled with brilliant confrontational scenes between K K Menon, Atul Kulkarni and Rana which engage you into the narrative completely. Special mention should go to the art department for showcasing the submarine and its interior in a splendid way. Not once do you feel that the entire movie is filmed on a set

Yet another advantage for the film is the detailing done to the film. Every aspect from the submarine, uniforms to the visual effects everything has been carefully dealt with.

Taapsee’s role has nothing much to do with the proceedings. There are many scenes in the film where more drama could have been easily added. Scenes like blasting of the Pakistani submarine and the way national anthem is sung by the naval officers could have worked even more if they had some hard hitting emotions going.

The first half of the film has more confrontational scenes which might not go well with the regular audience. One who expects some great war scenes in the film will be disappointed as Ghazi is based underwater and only limited action scenes are showcased.

Ghazi is just brilliant on the technical side. Even though it is a Telugu film, the proceedings look of international standards. Special mention should go to the VFX team who showcase the underwater scenes in a splendid way. Dialogues are very good and every aspect of the naval officers like the commands and gestures used have been showcased in a perfect way. Even though background score is okay, there are many scenes where a better score could have elevated things in a far more better way.

Coming to the director Sankalp, he will probably go into the history of Indian cinema for pushing the boundaries of filmmaking and directing a film with a unique script and spellbinding narration. The debutante scores high points for sticking to the story and treating the stars just as actors. Not once did he showcase Rana in a superior way and just went with the emotions of the film. Directors like these make a mark and prove a point that Telugu films can also be made without the regular dance and fight routine.

On the whole, Ghazi is one of the most unique films that has come out in Tollywood to date. Very rarely do you get to see a film which has the right story, performances, and gripping narration which hold your attention completely. Superb performance from the lead cast and thrilling underwater war drama make this film stand apart from the others. On the flip side, Ghazi is a class film which will be a bit hard to make its way in the regular mass audience who look for sheer entertainment. Barring that small glitch of its reach, Ghazi is a must watch film which every Telugu movie lover who can be extremely proud off as stuff like this comes very rarely.