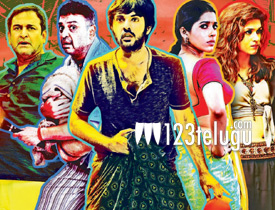 Guntur Talkies has been creating a good buzz off late for its interesting concept. The film which is directed by Praveen Sattaru has finally hit the screens today. Let’s see how it is.

Giri(Naresh) and Hari(Siddhu) are two middle class crooks who are into small time robberies. One fine day, they plan to make it big and rob off five lakhs from a middle class home in their village.

Hell breaks loose and within no time, they find out that two dreaded dons, Jackie(Mahesh Manjrekar) and Revolver Rani(Shraddha Das) are after their life.

Who are these two dons ? What do they have to do with this robbery ? and where does the sensuous Rashmi Gautam feature in this set up. That forms the rest of the story.

One of the biggest asset of the film is the performance of Naresh, Siddhu and Mahesh Manjrekar. Particularly Naresh, he has done a superb job in his role. The way he evokes superb comedy and just yields into his character is wonderful. Naresh is proving what a talented actor he is in his second innings.

All the combinations scenes between Naresh, Siddhu and Mahesh Manjrekar have been executed well. Siddhu surprises with his decent act in the second half. Coming to Mahesh Manjrekar, he is hilarious as the comedy don and mouths his double meaning dialogues well.

Even though Rashmi does not have much scope to perform, she impresses in her role and provides the necessary eye candy for the masses. Comedy during the pre-climax is also very good. Shraddha Das works hard on her role and also impresses with her dubbing.

Even though the story idea is good, the way it has been executed on screen is the biggest drawback of the film. The film falls in the crime comedy genre but sadly, none of the main episodes evoke any humour in the film.

Naresh tries hard to make things work but time and again, the film falls flat as many important scenes end up looking silly. Shraddha Das and Rashmi’s characters do not have much weight in the film.

Noting much exciting happens during the first half as the actual story only kicks off post the interval. As the film has major adult comedy, it will only attract a certain section of the audience.

Music by Sri Charan is pretty impressive. The tunes he has given and the way he composed the background score speaks volumes of his talent. Camera work by Ram Reddy is also top notch. The way he has set up the mood of the film with his creative lens work is decent.

Coming to the director Praveen Sattaru, even though his concept is novel, the way he executed the film is disappointing. Except for a few interesting scenes, his narration lacks focus and the film fails to impress in many areas.

Overall, Guntur Talkies fails to live up to all its expectations and hype. Even though the film was promoted to be a new age crime comedy, the execution is quite ordinary and routine. Except for the superb performance by Naresh and sensuous avatars of Rashmi and Shraddha Das, this film has nothing much interesting to offer and ends up as just an ok watch this weekend.