Review : Inttelligent – Not so Clever 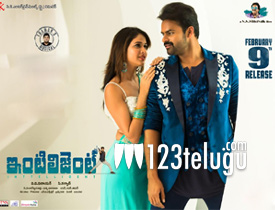 Sai Dharam Tej is going through a tough time in his career and badly needs a hit under his belt. He has pinned a lot of hopes on his new film Intteligent which has hit the screens today. Let’s see whether this film gives Tej his much-needed hit.

Dharam Tej(Tej) is a software engineer who is very loyal to his company and its MD(Nasser). As time passes by, a criminal gang lands in Hyderabad and tries to overtake the company. In this process, Nasser gets killed and to make things better, Dharma Bhai enters the scene. Who is this Dharma Bhai? What does he have to do with Nasser and his company? and how does he solve all the problems? That forms the rest of the story.

Sai Dharam does well in his role as a software engineer. The way he transforms himself in the second half and carries the film on his shoulders looks okay. He has danced well and acting wise, Tej is pretty sincere in whatever he does. Lavanya Tripathi is just about okay in her role and does not have much to do with the film.

Some comedy generated through Posani and Jayaprakash Reddy during the initial stages of the film evokes some laughs. The interval bang where Dharma Bhai is revealed looks good. The slight comedy about Dharma Bhai featuring Brahmanandam is decent to an extent.

One of the biggest drawbacks is that the film lacks a basic story line. Mafia overtaking a software company looks quite odd and does not generate any novelty. The film is filled with over the top elements completely which have no sync at all.

Characters keep coming in frequently and deviate your attention. Vinayak is stuck in the good old days and narrates things on a predictable and silly note. There are scenes where thousands of crores from the villain gang are transferred to poor people just like that. The film is filled with such silly scenes which are meaningless.

The second half takes a severe beating as thing happen so conveniently for the hero. Yet another drawback is that there are no major twists in the film as the proceedings are unleashed on a dull note.

Production values of the film are mediocre as the visuals look quite outdated in many areas. Music score by Thaman is a huge disappointment as none of the songs impresses. Choreography for the Chammaku Chammku looks odd as Lavanya struggles hard to match steps with Tej. Camera work is okay and presents the film on a decent note. Story and dialogues by Akula Shiva are silly and stuck in the 90’s era.

Coming to the director Vinayak, he has done a very disappointing job with the film. Intteligent is his weakest film in his career as it looks quite outdated right from the scene one. There is no basic emotion in the film and the screenplay by Vinayak does not help matters much. The star director has failed to connect the audience in not even a single aspect making things difficult for them.

On the whole, Intteligent is V V Vinayak’s weakest film to date. The routine story, predictable narration and lack of basic twists and entertainment go against the film completely. It is sad to see Sai Dharam Tej’s sincere efforts and performance go waste in the film. Even a star hero cannot help matters when films like these are narrated in such a haphazard manner. Apart from Tej’s role and screen presence, this film does not generate any interest and ends up as a disappointing watch this weekend.