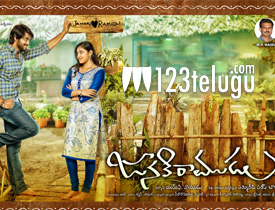 Firmly believing in the evergreen genre of romantic dramas, debut director Tammineedu Satish Babu has come up with a love story titled Janaki Ramudu. The film has Naveen Sanjay and Mouryani playing the main leads. Let’s see how the movie fared.

Ramu (Naveen Sanjay) is a college going student from a village. He falls madly in love with Janaki (Mouryani), his classmate. Janaki too reciprocates Ramu’s love and a happy Ramu heads to Hyderabad and vows to marry Janaki only after he achieves his long cherished ambition.

But in a twist of destiny, Janaki distances herself from Ramu upon his comeback to the village. What caused the couple’s split? What was Ramu’s ambition? How does their love story end? Watch the movie to know the rest of the story.

The main plus point in Janaki Ramudu is the way the director showcased the love story with a beautiful village backdrop. Anil’s splendid cinematography stands out as it explores the stunning village locales to perfection in every frame.

A few romantic scenes between the lead pair in the first half and a couple of songs are quite good. Sudharshan’s comedy in the first half engages the audience. Yet another major plus point is the thrilling twist that comes in the second half. Newcomers Naveen Sanjay and Mouryani did well in their roles.

The film’s routine love story is the major minus point in the narrative. The love scenes lack freshness and even the lackluster screenplay doesn’t help the matters much. Scenes featuring the hero and his friends irritate the audience.

Scenes involving hero’s goal in the second half aren’t convincing and lack the required intensity. Lethargic editing dilutes the experience even further.

The director fails to showcase any novelty factor in the movie. He waterdowns a routine love story with his lackluster screenplay. Anil’s cinematography is the soul of the movie. Lyrics penned by Ananth Sriram and Sri Ramana are impressive and Gifton Elias’ music is average. The film’s production values are decent.

Love stories usually find takers in all sections of audiences. However, Janaki Ramudu faulters with its unexciting script and screenplay. A few comedy and romantic scenes and a solid twist are the only saving grace in this movie. Those who head to watch Janaki Ramudu expecting an intense love saga will be disappointed.