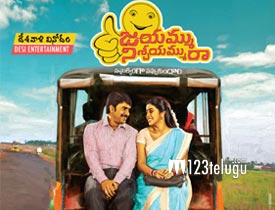 Srinivasa Reddy has been promoting his latest film Jayammu Nischayammu Raa on a huge scale. The film which also features Poorna as the female lead has hit the screens today. Let’s see how it is.

Sarvam(Srininvasa Reddy) is a government employee from Karimnagar who gets transferred to Kakinada. There, he falls in love with Rani(Poorna) but does not reveal his love because of his introvert nature.

His only now aim is to marry Rani, get himself a transfer by impressing his boss(Ravi Varma) and settle down happily. The twist in the tale arises when he comes to know that the heroine likes someone else.

What will Somasekhar do now ? How will he win Rani’s love ? and at the same time, how will he impress his boss and get his transfer done ? That forms the rest of the story.

One of the biggest plus points of the film is the intriguing storyline. The way the film has been set in a small town and weaved around a government office is quite good. Srinivasa Reddy is the heart and soul of the film. You never see Srinivasa Reddy the comedian, as it is his innocent character and the way he performs in it which impresses you big time.

Poorna suits the role of a small town girl completely and gives ample support to the hero. Krishna Bhagwan, after a long gap, gets a hilarious role and evokes superb laughs in the second half.

Ravi Varma plays his negative role to the ‘T’ and is a perfect cast. The second half of the film has ample comedy and interesting proceedings featuring the lead pair. The climax and the way the love story is ended have been executed nicely.

Even though the first half is neat, it is very slow. The director takes his own sweet time to enter into the main plot and keeps establishing the characters which take most of the time.

Also, the way Srinivasa Reddy’s character gets way too street smart during the second half looks a bit over stretched. A song which comes during this time looks out of place and boring. All those who think Srinivasa Reddy will impress you with his hilarious comedy touch will be disappointed a bit.

Production values are amazing in the film. The native atmosphere, government office set up have been created in a wonderful way. Credit should go to the cameraman for showing the film in such a feel-good manner. Music is decent and does not hamper the flow of the film. Dialogues are decent and so was background score.

Coming to the director Sivaraaj, he has done a decent job with the film. He had a good script and the way he has written his characters around it is quite impressive. He narrates the second half in an entertaining tone without missing the feel-good nature of the film. The major area where he falters is he makes the entire first half very slow paced and this can upset many.

Jayammu Nischayymuraa is a feel good film which has its heart in its place. A small town set up, earthy characters, good comedy and Srinivasa Reddy’s impressive performance will surely go well. But at the same time, one needs to sit through the very slow and jaded first half which can get to you at times. If you are okay all these things, you can easily give this small town love story a shot which has some interesting moments.