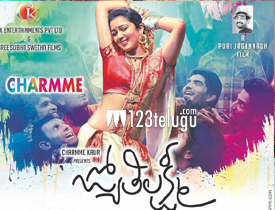 Jyothi Lakshmi is certainly a do or die film for Charmme. She has a lot of hopes and money riding on this film as she is also one of the producers. Directed by the super talented Puri Jagan, this film has hit the screens today. Let’s see how the film is.

Satya (Satyadev) is a software engineer who falls in love with a girl named Jyothi Lakshmi (Charmee). He visits her home daily and spends some precious time with her. One fine day, he proposes Jyothi Lakshmi and reveals that he wants to marry her.

After seeing Satya’s honesty, Jyothi Lakshmi decides to start a new life and plans to elope with Satya. Does she manage to leave her dreaded life behind ? Will her past haunt her ? and what consequences does she face after she changes her life style is the entire crux of the story.

Charmee is the main pillar of the film. The way she goes about her character and showcases different variations is impressive. She is bubbly and bold in the role of a prostitute and is quite rebellious and serene in the second half. One can easily say that it is Charme’s career best performance.

The actual show stealer is the young actor Satyadev. He has a terrific screen presence and gives a subtle performance. He will surely have a long career in Tollywood and gives superb support to Charmee in this film. First half of the film is quite bold and some scenes will be liked by the masses.

Interval bang is interesting and has been executed well. Hyderabadi film actor Aziz Nasser is pretty decent in his supporting role. Dialogues by Puri Jagan are bang on and will hit you effectively. The way women empowerment has been showcased is decent.

One of the major drawbacks of the film is that the way Charme’s character transforms. After showcasing her quite boldly, the way she changes herself for good looks hurried up. The way Satyadev’s character is abruptly sidelined in the second half lacks effect.

Even though the film has a good message, it gets preachier during the second half. Charme’s speech during this time has been stretched out a bit. Brahmanandam’s role looks out of place and does not have any effect.

Lack of known faces might also go against the film. Even though the songs are good, they have been placed wrongly in the second half. There was no need of an item song which spoils the flow of the serious film. Story of the film is quite routine and has been dealt many a times.

Music of the film is impressive and especially the background score elevates the film well. As mentioned earlier, dialogues are pretty good and carry the mood of the film well. Screenplay by Puri Jagan is crisp and makes up for some interesting scenes. Camera work is also decent but certain visuals lack clarity about the set up of the film.

Coming to the director Puri Jagan, he has been making films which also have an underlying message. He delivers a decent message in a commercial format but drags it a bit during the end. Editing by S R Sekhar is pretty impressive.

On the whole, Jyothi Lakshmi is a bold film which has a message with a twist. But the message is dragged out too much. Charme’s power packed performance and a decent first half are huge assets. This film will some draw huge crowds in the B and C centers but is just a one time watch for those who seek popcorn entertainment.