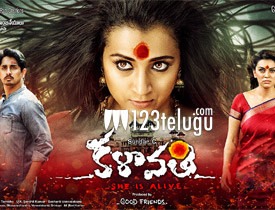 Sundar C is back with the second installment of his hit film Chandrakala. Titled Kalavathi, this film has Trisha, Hansika and Siddharth as the main leads and has hit the screens today. Let’s see how it turns out to be.

Murali(Siddharth) heads back to his native place along with his fiance Anitha (Trisha) after knowing that his father is in last stages of his life. As soon as the couple land there, some weird things start happening in their house.

This is also the time when Anita’s bother(Sundar C) enters the scene and takes things in control. He installs cameras all over the bungalow and records every thing whats going on. After a terrible incident involving Murali’s brother, everyone decides to look at the recorded footage.

To their surprise, they find out that the ghost in the footage is none other than Murali’s own sister Kalavathi(Hansika). What is the actual back story behind Kalavathi ? and Why is she after every one in the house ? To know answers to these questions, you need to watch the film on the big screen.

One of the biggest plus points of the film is that director Sundar has cleverly played it to the galleries. He has added enough comedy, thrill and intense moments which elevate the film well.

Trisha looks gorgeous and is superb in her role. The way she has performed in the horror episodes is pretty good. While she impressed with her beauty in the first half, she gets scary during the second.

Hansika is the heart and soul of the franchise and has done her job well. Even though she has limited screen space, she causes good effect to the proceedings with her emotional avatar.

Kovai Sarala’s comedy elevates the second half to a decent level. All her scenes with comedian Suri evoke good laughs. Siddharth plays his supporting role well and goes with the flow of the film. Second half is a major plus as the tempo of the film raises big time.

First half of the film is a huge drawback. The film has traces of Chandrakala as the look, thrills and performances instantly remind you of that film. The makers could have removed at least two songs to make the film a bit breezy. There is nothing much new or interesting that is happening during the first half.

What’s more frustrating is that Sundar C had a lot of scope to scare the audience but he did not make proper use of it. All the thrills, comedy and family emotions that are shown during the first half are routine. There are certain logics which have been overlooked and they are clearly visible.

Visual effects of the film are pretty good and create a good impact on the audience. Music by Hip Hop Thamiza is below par as none of the songs register. Background score is good during the climax but is below average for rest of the film. Editing is ok and so were the dialogues. Camera work is impressive as all the thrills were captured effectively.

Coming to the director Sundar C, he has done a pretty decent job. He has made sure that there is enough glamour, thrill and comedy and does not go overboard with the proceedings. Had he narrated the first half with enough emotions and some interesting horror elements, the effect would have been far better.

The makers of Kalavathi have stayed true to the genre and did not experiment much. They have played it safe and added enough elements which will entertain everyone. The film lacks novelty and also does not have any spine chilling moments. However, a decent second half filled with enough mas elements makes things work. Finally, if you manage to sit through the very ordinary first half, you can easily enjoy this decent suspense thriller.