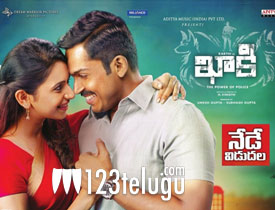 Khakee is one film which has been creating a lot of buzz off late. Based on a true cop story, this film has Karthi as the main lead and has hit the screens all overtoday. Let’s see how it is.

The film is set in the early 90’s and Dheeraj(Karthi) is a fierce Tamil Nadu cop who is quite famous for his uncompromising attitude. During this time, the entire state is struck by some brutal robberies all over. People die in these robberies but the cops do not have any clue at all. This is the time Dheeraj takes charge of this case and finds out that a huge dacoit gang from Rajasthan is behind all this. Rest of the story is as to how Dheeraj cracks this case and nabs all those who are behind this.

One of the biggest plus points of the film is the riveting screenplay. The film has full on edge of the seat moments which will keep you hooked till the end. Credit should go to the director for his detailing. The way the case is handled over the years has been shown with utmost clarity and gripping narration.

Karthi is back with a bang and shines as DSP Dheeraj. Every move of his is linked with the role he plays and not once do you see him getting sidetrack during the entire operation. Rakul Preet does her bit and is good support for Karthi.

The interval bang and bus chasing sequence in the second half literally gives you goosebumps. Abhimanyu Singh as the main villain is pretty awesome. The main thing that keeps you entertained with Khakee is the continuous flow of action elements throughout the film.

All those who are looking for some pop-corn entertainment will be a bit disappointed with this film as it is a serious cop drama with dark elements and brutal action.

The film takes a lot of time to get into the actual storyline as Rakul Preet and Karthi’s romantic track bores you at times. Songs of the film are quite disappointing and should have been avoided.

Khakee is high in technical aspects. Camera work by Sathyan Sooryan is top notch as he brings the 90’s effect in a effective manner. Also, the way he showcases the fights and barren lands in Rajasthan give a lot of depth to the film. Telugu dubbing is decent and so were the production values. The production design and artwork which showcased the cop set up is quite good. Editing is slick and so was the background score by Ghibran.

Coming to the director Vinoth, he has done a very good job with the film. His detailing with the case is awesome and the way he narrated the film with ample action elements and racy chasing episodes make this film click big time. He keeps the film quite realistic which makes things even more interesting for the audience.

On the whole, Khakee is a riveting cop drama which has many edge of the seat moments. Very rarely do you see such thrillers which are showcased without diverting from the main point. Karthi’s tough cop act, racy action elements and gripping narration are major assets to the movie. As the film is genre specific, it does not have any commercial elements whatsoever. So, all those who like action films and are looking forward to watch a realistic action thriller, Khakee is one film you should not miss this weekend. Go for it.