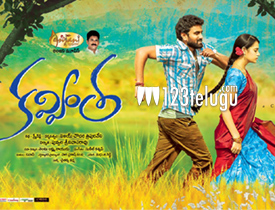 Continuing with the trend of low budget films, yet another film which has hit the screens today is Kavvinta. Also starring Vijay and Deeksha Panth, let’s now see how this film turns out to be.

Seenu(Vijay) is a happy go lucky youth who lives in a village called Saluru. He has a huge crush on Rani(Deeksha Panth) who is his close relative. To his bad luck, Rani’s parents disapprove of Seenu as he has no job and responsibility in life.

On the other hand, a dreaded don named Sarkar decides to expand his fake currency business in India and locks Saluru as the kick start point. He unloads a huge amount of fake currency from Pakistan and keeps it in a secret place in the village.

Twist in the tale arises when Seenu’s life clashes with this mess and tilts it up side down. How does Seenu land in this huge trouble ? What happened to his love story ? and How will he come out of these problems ? That forms the rest of the story.

One of the plus of the film is the way two parallel stories have been written. Also, the point which combines these two stories is impressive. The makers have dealt with this point well and also showcased it nicely.

The episodes which come during the pre-climax and climax have been elevated well. The vulgar fun that is generated during the climax works out well to an extent. Two romantic songs have been shot quite beautifully and have good production values.

Even though there are two stories running in parallel, none of them has enough weight in them. Right from the first frame itself, you get a clear idea as to what is going to happen in the end. The proceedings are quite predictable and have many scenes which are unnecessary.

The vulgar comedy that comes during the film may not go well with certain section of the audience. None of the characters in the film have any importance or depth in them. The writing is water thin with a lot of loopholes.

The villain’s character looks silly and does not bring any weight to the film whatsoever. Two items songs have been forced into the film which makes things even more irritating. Logic goes for a big toss in the film.

Camera work is pretty decent as it showcases the village backdrop on a decent note. Music by Sunil Kahsyap is also decent and particularly, the two romantic songs are good and have also been shot quite well. Editing is just about ok and so were the dialogues.

Coming to the director Vijay Chowdary, he has done a very poor job with his execution. Except for combining the two parallel stories, his narration is below par. He adds some unnecessary scenes throughout the film and makes it a painful experience.

On the whole, Kavvintha is a lack luster film which has nothing going its way. Except for some vulgar comedy during the pre-climax and climax, none of the elements work out in the film and can easily be given a miss this weekend.