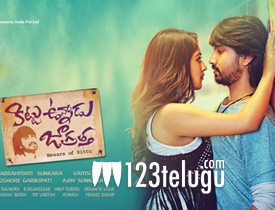 The promos of Raj Tharun’s Kittu Unnadu Jagartha have caught on quite well all over. After a good round of promotions, this hilarious entertainer has hit the screens today. Let’s see how it is,

Kittu(Raj Tharun) is a happy go lucky car mechanic who falls in love with Janaki(Anu Emanuel). As he faces some small time problems in his love story, he turns into a dog kidnapper and keeps earning money out of it.

One fine day, Janaki comes to know about Kittu’s true colors and breaks up with him. This is also the time when a deadly criminal called AR(Arbaaz Khan) suddenly kidnaps Janaki. Knowing this, Kittu sets on a path to rescue Janakai.

Who is this AR? What did he kidnap Janaki? How does Kittu manage to save her? That forms the rest of the story.

One of the biggest highlights of the film is the last half an hour. The comedy that is generated during this time brings hilarious laughs throughout. Especially, Prudhvi steals the show once again with his rib-tickling comedy. Probably, this is his best comedy track that has come out in the recent past. His role as the partially blind goon is quite impressive.

Even though the concept of kidnapping dogs sounds odd, the way it has been showcased in a humorous way is quite convincing. Raj Taj shreds his hero tag and becomes an important character which is very good to see. Anu Emanuel has beautiful screen presence and elevates the otherwise ordinary romance.

Arbaaz Khan is pretty impressive as the bad guy. He carries out his role sincerely and brings a lot of depth to the proceedings. As said earlier, the racy screenplay during the second half is good and provides some very decent entertainment.

The first half of the film is just about okay and moves on a very simple note. The comedy generated through Kalakeya Prabhakar is very routine and boring. Also, the proceedings showcased till the interval bang do not create much impact.

The comedy track of Vennela Kishore and Raghu Babu is below par. The way Arbaaz Khan’s role is ended during the climax is not up to the mark. Music by Anup Rubens is a huge disappointment as only two songs are good to watch on screen.

The story of the movie has nothing new to offer but director succeeded in presenting it with a good screenplay by adding the concept of kidnapping dogs. Editing work by M.R Varma is okay. Cinematography by B. Rajashekar is adequate. Productions values of the movie are very good as the makers have spent a good amount on this limited budget movie.

Coming to the director Vamsi Krishna, he has done a good job with the film. He has cleverly added the right elements like hilarious comedy and filled the film with ample entertainment.

On the whole, Kittu Unnadu Jagartha is a fun entertainer which has some hilarious comedy during the last twenty minutes. Even though there are many logics which go missing, the makers have cleverly added good fun at regular intervals. On the flip side, an outdated love track and a slow first half are basic drawbacks. All those who are okay with such small glitches and want to ave an enjoyable weekend, you can happily watch this which will be yet another decent outing for Raj Tharun.