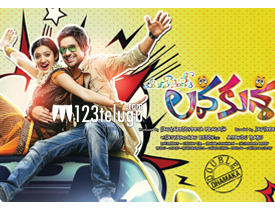 Young actor Varun Sandesh, is desperate to make a strong comeback after a string of flops. He has pinned a lot of hopes on his latest flick Lava Kusa. Directed by debutante Jay Sree Sivan, this film has hit the screens today. Let’s see how it is.

Prem Kumar (Varun Sandesh), is a cheerful cab driver. One fine day, he comes across his lookalike Kushal Kumar who is searching for a girl to settle down. After a few days, both of them fall in love with Subba Lakshmi (Richa Panai) and Satya (Ruchi Tripati) respectively.

As time passes by, they decide to settle down in life and kidnap a small kid. After a while, they regret their mistake and decide to return the boy to his parents. Then comes a shocker in the form of little twist. What is that twist ? and what happens to the kid during all this chaos ? That forms the rest of the story.

Varun Sandesh gave a decent performance in his dual role. The second half of the movie has some interesting scenes. This is where the twist in the plot unravels and invokes decent excitement for the audience. The special cameo played by Brahmanandam as ‘Mixi Raja’ and his funny track in the climax gives an added advantage to the film.

Apart from Varun Sandesh’s performance, comedian Prabhas Sreenu as ‘Item Raja’ did complete justice to his character. His comic timing and the frolics played by his gang gives a nice boost to the proceedings.

The first half is the major setback for this movie. A lot of unnecessary scenes stops the free flow and certain elements in the script do not connect with the audience. Till the interval block, none of the scenes invoke any sort of interest for the viewers.

The execution of the plot is not up to the mark. Although, the basic story line is scripted well, the director fails to make it engaging for the audience. Both the female leads in the movie were not given thorough importance. The skin show in a couple of songs seemed a bit over.

The cinematography is good in every frame and a couple of songs were presented nicely. Production values are impressive as the makers have not compromised in any segment. Editing should have been carried out with some extra care as many scenes looked lengthy.

Despite having a decent story line, the director doesn’t make full use of it. Also, the predictable narration plucks the energy out of this movie. Music given by Ram Narayan is good and the lyrics are ok.

On the whole, Varun Sandesh needs to wait some more time for a hit under his belt. Even though he did his best in the film, a weak narration followed by a predictable screenplay makes it a below par movie. The comedy track and a few interesting twists in the second half are the only saving grace for this film which can be watched when it is shown on tv.