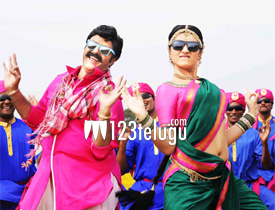 Nandamuri Balakrishna is back with yet another powerful entertainer Lion. Directed by debutante Satyadeva, this film has hit the screens today. ​ Let’s see how the film is.​
​​
Story:-

The story of the film starts off with Bose(Balakrishna) ​coming back to life after staying in a coma for eighteen months. As soon as he recovers, Bose is ​suddenly ​mistaken as Godse by everyone around him.​ ​Bose keeps convincing all of them that he is not Godse and has his own story.

Who is this Bose ? What does he have to do with Godse? What is t​he​ story behind all this ​confusion ? And where do Radhika Apte and Trisha feature in this set up. That forms the rest of the story.
​​
Plus Points :-

Balakrishna is the heart and soul of the movie. Right from the word go, he is the centre​ of attraction and gives a power packed performance​ yet again​. The way he has showcased different variations in both his characters is wonderful.​ Balayya’s trademark dialogues and action sequences have been executed well.

Some ​confrontation scenes between Balakrishna and Prakash Raj have come out well. First half of the film has an interesting suspense building up. Second half has typical trademark Balayya kind of action entertainment. Trisha looks beautiful and ​suits ​her ​role well.

Prakash ​​Raj does well in his role and is perfect as the villain. Songs have been shot quite well and the number featuring both the heroines will definitely go down well with the masses. Interval bang is the biggest highlight and has been conceived well.

​The romantic track between Balayya and Trisha is a big disappointment and spoils the flow of the film. All these scenes look silly for Balayya’s age and could have been totally avoided. Radhika Apte has absolutely nothing to do except for appearing in songs.

The film has a roller coaster kind of a feel. After a few very interesting scenes, pace in the movie drops and this continues till the film ends. Once the twist is revealed post interval, the film gets predictable. Some routine action and chasing scenes take center stage.

There are major loop holes in the flick which can be found out by the general audience easily. There are many characters which do not have proper justification. Jayasudha is completely wasted in her role.
​
Technical Aspects :-

Background score by Mani Sharma is pretty decent and elevates the film to another level. Songs are just about ok and have been shot well. Dialogues written for Balayya are top notch and will get decent applause from the audience. Screenplay of the film lacks focus. As mentioned earlier, some unnecessary episodes disturb the flow of the film.

Coming to the director Satyadeva, he makes an ok debut and manages to showcase Balayya in a wonderful light. He extracts superb performance from him but falters a bit with his narration and does not generate enough depth in his story line.

On the whole, Lion is a complete Balakrishna film right from the word go. His power packed performance is the major asset and will go down well with the masses. On the flip side, lack of proper handling of the subject and a predictable second half makes this film just an ok watch. Watch it only for Balayya.