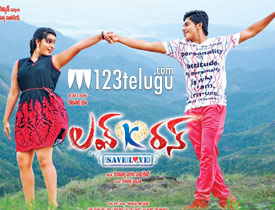 Yet another child artist, Deepak has turned into a full-fledged hero with the film Love K Run. The youthful entertainer has hit the screens today and let’s see how it is.

Kiran(Deepak) and Anjali(Malavika Menen) are two college mates who fall in love with each other. As time moves by they face a problem with one of the guys in the same college. Somehow they manage to deal with him cleverly and continue on with their love life.

Right, when the time they decide to express their situation to their parents, they, in turn, get a huge shock from their respective families. What is that shock ? and how will the young couple come out of it and get united at the end forms the rest of the story.

One of the biggest assets of the film is the striking chemistry between the lead pair. The young couple looks good together and brings a freshness to the film. Deepak makes a good debut and does his role within his limitations. The different scenes between the lead pair which have been shown in the Aruku backdrop looks good.

Malavika too does a very good job in her role. She looks beautiful and also showcases decent emotions on screen. Tagubothu Ramesh and Krishna Bhagwan bring some comedy to the proceedings. Interval bang is pretty decent.

The film is filled up with routine and predictable scenes which you have seen many a time in the past. The entire film is dragged for a simple flashback which comes during the second half. Even the flashback shown irritates you and the film ends on a very silly note. There is no proper justification to the title and many scenes in the first half.

The weakest point in the film is the lack of a strong storyline. Even though the chemistry and performances are good, lack of strong conflict points and basic twists lets down this film completely. Dialogues look completely forced and so were many scenes.

J P’s music is just about okay but his background score is just below average. Production values are just okay and so were the dialogues. Editing is pathetic as many scenes could have been removed. Coming to the director Sreenu, he has done a lacklustre job with his direction. None of the elements narrated by him managed to impress the audience. The only place he scored marks was the way he extracted some chemistry from the newbies.

On the whole, Love K Run is an outdated and predictable love saga which has nothing much exciting about it. Terrible story line, lack of emotions and dragged out climax spoil the proceedings completely. Except for the good chemistry between the lead pair, this film has nothing much to offer and can be ignored this weekend.