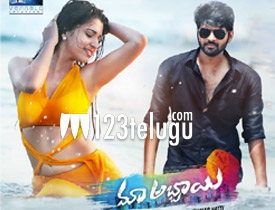 Sree Vishnu, who impressed the audience with his acting in Appatlo Okadundevadu has come up with yet another action entertainer titled Maa Abbai. Directed by Vatti Kumar, this film has released today. Let’s see how it is

Sree Vishu is an easy going youth who leads a happy life with his small and sweet family. He falls for a girl (Chitra Shukla) who lives in his colony and when things seem to be going fine, a terrorist attack completely changes his life upside down. What problems does Sree Vishnu face during this time and how does he takes his revenge forms the rest of the story.

Though director Vetti Kumar came up with a normal story, he succeeded in mixing family emotions and commercial elements to some extent. Sree Vishu completely carried the film on his shoulders and has impressed with his acting in emotional scenes.

He is completely projected in a mass avatar and his dialogue delivery and energetic screen presence are good. Heroine Chitra Shukla’s glamour is okay in the songs. The sister sentiment showcased in the film works well.

Though the first half of the film is okay with some family moments, the second half completely goes off track will illogical scenes. Hero finding his enemies and the procedure he follows are hard to digest at times.

The screenplay is one of the major demerits as it completely runs as per hero’s convenience. Some unwanted family episodes which come in the pre-climax will irritate and test the patience of the audience. Songs which come at regular intervals completely divert the film’s flow.

Director Vatti Kumar’s narration is half-hearted. Cinematography by Thama Shyam is good. He tried his best to give a grand look to the film. Editing work by Marthand K Venkatesh is adequate. Production values are good. Dialogues are decent and so was the music.

On the whole, Maa Abbai is a routine commercial revenge drama which projects Sree Vishu in a complete mass avatar. The film has nothing new to offer but some decent family emotions and mind games make this film a below average fare this weekend. Watch it at your liesure.