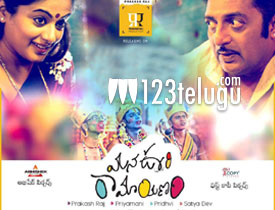 Once in while, Prakash Raj comes up with some very interesting projects and Mana Oori Ramayanam is one such film. The film which also stars Priyamani as the female lead has hit the screens today. Let’s see how it is.

Bhujangaih(Prakash Raj) is one of the most respected persons in his village. He has a teenage daughter whom he plans to get married off quickly. One fine day, he gets into a heated argument with his family regarding this and walks out of his house in anger.

He gets drunk fully and spots a prostitute(Priyamani) and hires her for the night. Bhujangaih brings her to a small shop which is located in his house compound and asks his auto driver Shiva(Satyadev) to lock him from outside and come back after an hour.

The twist in the tale arises when Shiva gets arrested and Bhujangaiah is left in a tricky situation. Rest of the story is as to how Bhujangaih comes out of this mess without getting caught by his family.

Even though the story sounds a bit adultery, there is absolutely no obscenity in the film. Once again, Prakash Raj leads from the front and delivers a knockout performance. The way he showcases various emotions like anger, stress and guilt speak volumes of his acting prowess. All his scenes with Priyamani have come out quite well.

30 years Pruthvi is yet another highlight of the film. The way he gets stuck in a tricky situation and plays the role of a frustrated director is just superb. Young actor Satyadev does a wonderful job in his supporting role. He looks natural and all his scenes with Pruthvi are quite funny.

Priyamani does what is required of her role and does not go overboard. The entire film has a thrilling element as the proceedings get quite interesting for most of the time. The interval block and second half of the film are decent.

The first fifteen minutes of the film are quite slow as the story of the film takes a lot of time to get started. Things get bogged during this time as too much time has been taken to establish the characters and story.

Even though this is not a drawback, the subject matter of the film is such that the audience who seek regular entertainment might get disappointed with the proceedings of the film.

Prakash Raj goes into minute details and nicely handles the every aspect of the film. Right from the setup to the characters shown, the small town thinking and nativity has been handled quite well.

The camera work is superb and showcases the village life decently. The background score by Ilayaraja is top notch and lightens up the proceedings. Screenplay by Prakash Raj is another good part as the proceedings move on a crisp note and end the film well.

On the whole, Man Oori Ramayanam is a film for the select audience. One needs to have a different taste to accept such films which are made on a simpler note without any commercial aspects. Prakah Raj’s superb performance and Pruthvi’s role are some basic assets. On the flip side, the serious subject of the film might keep the family and general audience away and makes this film just an average watch this weekend.

As the film does not belong to either the commercial or art cinema zone, we at 123telugu found that such interesting subjects made with a very honest and decent approach should not be rated and have decided to go by N/A rating.