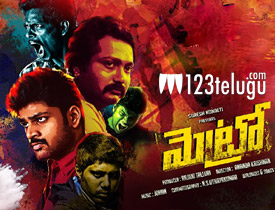 Out of the many small budget films that have released this week, Metro is one film which has a very interesting premise of chain snatching. Let’s see whether the film manages to impress us or not.

The film is based on the story of a chain snatching batch and how an innocent young engineering graduate is forced to join the deadly gang. The dark thriller showcases how the life of the young man and his family changes upside down after he gets entangled into this scary mafia. How all this is showcased through some good twists and turns forms the rest of the story.

One of the biggest plus points of the film is the very interesting concept. The way a small time crime like chain snatching has been made as the backdrop and an emotional family drama has been weaved around it was very nice.

The way chain snatching takes place and how the thieves target the ladies and what happens to the gold that has been robbed, incidents like these have been showcased in a gripping manner.

Bobby Simma is very good in his negative role and brings a lot of depth to the film. The supporting cast does a superb job in the film. Credit should go to the director for choosing some realistic actors who fit the bill perfectly. The climax is quite convincing and has been dealt well.

The main lead commits some serious crimes and keeps getting away most of the times looks a bit over the top in certain areas. As the film is a dark thriller, there is absolutely no fun factor. Also, the lack of known faces can go against the film a bit.

Production values of the film are very impressive. The gritty areas and bylanes of the city have been showcased with some stunning camera work. Background score by Johan is superb and elevates the proceedings to a decent level. The screenplay is quite gripping and showcases the film in a very decent manner. The Telugu dubbing by Nandu and Dhanraj suit the characters well.

Coming to the director Ananda Krishnan, he has done a pretty decent job with his narration. His strength lies in the way he handles all the characters and extracts performances from them. Even though he goes overboard with the crime in certain areas, he manages to direct the rest of the film in a novel way.

On the whole, Metro has a very interesting plot which is narrated equally well by director Ananda Krishna. The dark thriller has some realistic moments which thrills you most of the time. If you are the one who likes dark thrillers and does not mind the lack of entertainment, you can easily watch this film this weekend.