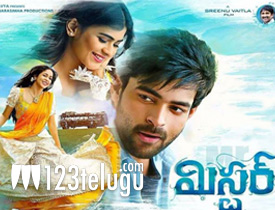 Mister is a do or die film for Sreenu Vaitla as the success of this movie will bring him back in the game. After a huge round of promotions, the family drama has released today and let’s see whether Sreenu Vaitla makes a comeback or not.

Chai(Varun) is an NRI settled in Spain who falls in love with Meera(Hebah Patel). But to his bad luck, Meera likes someone else and leaves back to India for her wedding. One fine day, she calls up Chai and says that she is in a lot of trouble and requests him to save her.

Left with no choice, Chai lands in India but gets engrossed in an even bigger mess from Chandramukhi(Lavanya) and her family. Rest of the story is as to how Chai deals with the problems of these girls all alone and ends up marrying one of them.

The first half has some breezy moments as the love story between Varun and Hebah has been showcased in a decent way. You can see the vintage Sreenu Vaitla comedy during this time as Srinivasa Reddy and Raghu Babu’s episode evokes good fun.

Varun Tej performs to the best of his capabilities and tries to shoulder the film till the end. Performance-wise, he has done a decent job and is improving with every film. Hebah Patel gets a meaty role and does well with her simple character. Sadly, Lavanya Tripathi had very little to do in the film but she makes the most of it and looks elegant in her traditional role.

Prudhvi and Shaking Seshu’s comedy entertains in places during the second half. Production values of the film are top notch. Especially the foreign locations chosen and the way they have been utilized looks very good in the film.

Once again, Sreenu Vaitla falls short of expectations and derails the film. Just when you think he is back with a decent first half, Vailta makes the last ten minutes in the first half and the entire second half go for a toss.

The plot becomes so illogical as many characters keep entering the proceedings for no reason. Every major character has a flashback and the Karnataka set up and the kings shown will irritate you to no extent. You at once start wondering what is going on in the proceedings as not even one scene makes any sense during this time.

The climax of the film is another disappointment as forced family emotions and unnecessary fight leaves you disheartened. Adding to this, the run-time of the film is also way too long and makes you wonder as to what the makers were doing during the editing time. There are way too many boring comedy scenes in the film which keep coming in once in a while. Especially the Shakalaka Shankar and Priyadarshi scenes and much more stuff like this should have been chopped off.

Sreenu Vaitla makes the film look quite grand as the production values and the village set up look realistic. Camera work is very good as the Europe visuals and India set up have been showcased through some top aerial shots. Dialogues are witty in true Sreenu Vaitla style. Editing is pathetic as at least 15 minutes of the film could have been easily edited out. Varun Tej’s styling is unimpressive as he looks quite disoriented as an NRI.

Coming to the director Sreenu Vaitla, even after giving continuous flops, he has taken the story and execution part quite easy and made actors suffer in some horribly executed roles. Things become even tougher as the story gets aimless and goes into another zone without any meaning. The way Sreenu Vailta makes unnecessary characters enter at every juncture is the biggest drawback of the film. It is like watching different films in a single movie. Except for inducing some fun here and there, Sreenu Vaitla’s work is below average.

On the whole, Mister is one film which is only good in parts. There is some decent fun during the first half and also has a good star cast to support. But it is the execution which looks weak as the entire second half is disoriented and goes off track completely. Finally, if you do not mind the routine story and are okay with some over the top proceedings, you can give this film a shot only if you have nothing else to do. But for others who are looking for some thing interesting, look out for other options as well.