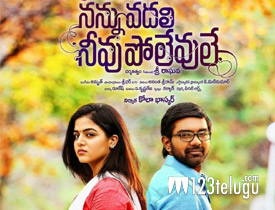 Noted director Selvaraghavan, takes a back seat and encourages his wife Gitanjali, to direct a mature love story titled Nannu Vadili Nevu Polevule. This dubbed version of the recently released Tamil film has hit the screens today. Let’s see how it is.

Prabhu(Balakrishna Kola) is an average looking middle class IT employee who wants to experience true love. He keeps trying hard but to his bad luck, he gets rejected because of his looks.

On the other hand, Manoja(Wamiqa Gabbi) is an urban girl who does not want to get married because of her troubled past. As her mother’s health starts deteriorating, she is forced into an arranged marriage with Prabhu.

Differences start creeping in between the couple because of their varied thinking. After a point, things go out of hand and the couple break up with each other. Rest of the story is as to how they manage to clear their problems and get back together.

Wamiqa Gabbi is the star of the film and surprises you with her emotional act. Right from the word go, she holds your attention with her caressing act and gives a solid performance. The way she has showcased the pain and grief through her expressions is just wonderful.

Balakrishna Kola is ok in his role and does well in parts. Even though the subject matter is quite simple, the way it has been narrated is good in parts. Interval bang is hard hitting and elevates the film well. The confrontation scenes between the couple have been showcased well.

As said earlier, story is very simple and reminds you of 7G Brundavan colony instantly. A normal looking guy falling for a beautiful girl, all this is quite similar to 7G. The only difference here is that the story is set between a married couple.

The content of the film is dark and hard hitting and might not suit the sensibilities of every section of the audience. Also, the pace of the film is very slow and might bore the hardcore commercial film lovers big time.

The way the film is ended is quite simple. I mean after showcasing so much pain and aggression through heroine’s character, the way she changes her mind during the pre-climax lacks conviction.

Though the film is made with a small budget, the production values are quite good. Camera work is brilliant as it brings an unique mood to the proceedings. The editing was quite ok but a song during the second half could have been easily removed.

Coming to the director Geetajnali, she has done an ok job with the film. Her writing is taut and she too executes the film well for most of the parts. But it is during the second half where her execution lacks focus and takes the film down.

On the whole, Nannu Vadili Nevu Polevule is a film, only for mature and selected audience. Wamiqa Gabbi steals the show and is the only asset. All those who like hard hitting dramas which are close to reality can give it a shot, but the rest can take it easy and wait for it to come on TV.